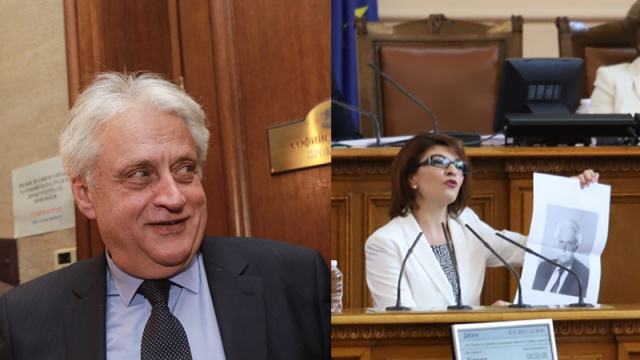 “I am beginning to think that ‘There Is Such a People’ (TISP) had no intention of participating in the formation of a government at all. In advance, there was an intention that this mandate would not take place. TISP imitated negotiations, there is something that accelerated these processes - the adoption of the anti-corruption law and the support for Rashkov to be the chairman of the Commission for Countering Corruption and Confiscation of Illegally Acquired Property (CCCCIAP). Asen Vasilev has been discussed for prime minister with our mandate”. This was commented to Nova TV by the chairman of the Bulgarian Socialist Party (BSP), Kornelia Ninova.

According to her, everyone can say whatever they want in their party, and Hristo Ivanov called her to apologize. "The bodies of the party will decide whether the mandate will be returned and we will announce it on Tuesday. TISP used DB's recording as an excuse to leave the negotiations. Hristov Ivanov gave it to them. From the fury, political brutality and aggression of GERB and DPS, it can be seen that they have a real fear that the fight against corruption will not happen through the change in CCCCIAP. They got scared and decided to withdraw TISP from the talks. We did not discuss or make decisions to remove Rashkov's name from the program, TISP received the program and returned it without his name," she pointed out. And she specified that the term of office is an occasion for attacks on BSP.

"I welcome Kiril Petkov's efforts to look for alternatives to gas supplies. There is concern regarding its provision," noted the BSP leader. And she revealed that with a working parliament and the Energy and Water Regulatory Commission (EWRC), measures to deal with high prices can be decided.

"One is for two tariffs - for lower consumption for poorer people and the higher one - for those with swimming pools and palaces. If there is no chairman, this cannot be resolved. A key element is the election of the chairman of EWRC". Ninova noted.

“Last year, there were appeals to us again, but they were to not return the mandate. No one then threatened with blood if the mandate was not returned. Everyone then asked us to keep it and did not think about the Constitution. Now, why is this difference? Because of the last 7 months. They understood that there will be no forgiveness for thefts, behind the scenes and corruption. The pressure and aggression are now unprincipled. The time is over when GERB and DPS can make decisions in BSP. After Trifonov's statement, the question of how long we will hold the mandate was not commented anymore,” said the resigned deputy prime minister.

According to her, there were no talks about TISP not having ministers in a possible new mandate. "None of the partners has set such a condition. The fact that it is going on in a DB conversation does not mean that a decision has been made on this issue," Ninova was categorical. And she added that the recording of “Democratic Bulgaria” is not an argument for withdrawing from the negotiations.

Bozhankov: Slavi pulled the plug and told us - without GERB and DPS it is not possible for this to work

“’There is such a people‘ were looking for a reason and they found it. I first saw Slavi Trifonov's statement before watching this recording. I assumed there was something offensive or something unacceptable. After listening to it, I was convinced that it was boring." This is what Yavor Bozhankov from the Bulgarian Socialist Party told bTV.

In his words, Slavi Trifonov once again failed every effort to govern Bulgaria in a format without GERB and DPS.

"With his fourth failure, Slavi Trifonov is saying one thing to the Bulgarian citizens - he cannot do it without GERB and DPS", Bozhanov believes.

"TISP is pulling the plug for the fourth time. The first times were Macedonian cosmonauts, then Plamen ‘The Snorkel’, then some crazy cabinet dictated from Trifonov's couch," said Bozhankov.

"We are one step away from accepting the new anti-corruption body, which according to the prevailing opinion in the former ruling coalition should be headed by Boyko Rashkov. I saw this fear in GERB and DPS in the hall. For me, this is the real reason Trifonov, in 11:55 a.m., to find a reason to withdraw from these negotiations and throw the state into elections," believes the MP from BSP.

Politics » Be a reporter: Write and send your article
Tags: BSP, There is such a people, government, Ninova, Rashkov
Advertisement
Advertisement
Expats.bg All Are Welcome! Join Now!
Related Articles:
More from Politics