Day 150 of the Invasion of Ukraine: 30 Soldiers a Day are the Ukrainian Loses says Zelensky 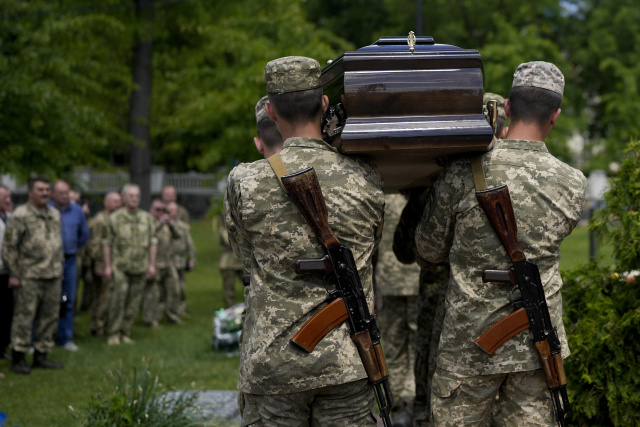 Zelensky: Ukraine loses up to 30 soldiers a day, around 250 are injured

Up to 30 Ukrainian soldiers are killed daily in combat operations against Russian troops, and around 250 are wounded, Ukrainian President Volodymyr Zelensky announced in an interview with the Wall Street Journal, as quoted by Ukrinform.

"At the height of the fighting in May and June, Ukraine was losing 100 to 200 soldiers a day, now that number has dropped to 30 a day and about 250 wounded," he told the publication.

Zelensky stated that he receives daily information on the issue from the military command. The change in the fire balance, which occurred thanks to the effective use of Western weapon systems by the Ukrainian troops, helped to reduce the number of victims, the publication says.

The president rejects the possibility of a cease-fire because, in his opinion, it would allow Russia to rearm and regroup, but also to maintain control over the captured territories, which would generally contribute to the expansion of the conflict.

"Freezing the conflict with Russia means a pause that gives Russia time to rest. They will not use this pause to change their geopolitics or give up claims to the former Soviet republics," he said.

According to him, Ukrainian society believes that all territories must be liberated first, and only then can it be agreed on what to do next.

Zelensky added that Russian President Vladimir Putin had underestimated Ukraine, and acknowledged that the Russian invasion had caused significant damage to Western businesses and consumers, but thanked allies for their continued assistance.

Ukrainian authorities reported that more than 1,000 Russian soldiers were surrounded by Ukrainian troops in the Kherson region in southern Ukraine, DPA reported. An adviser to the Ukrainian president, Oleksiy Arestovych, said that after a failed attempt to break through Ukrainian lines, Russian forces found themselves in a "tactical encirclement" not far from the village of Visokopolie.

The Ukrainian army launched several counter-offensives against occupying Russian troops in the Kherson region, which has been largely under Russian control since the early stages of the invasion. In recent months, there have been repeated anti-Russian demonstrations there and even attacks against representatives of the pro-Russian administration appointed by Moscow, BTA recalls.

The US government is considering supplying Ukraine with American fighter jets, the spokesman for the National Security Council at the White House, John Kirby, said, as quoted by DPA. In his words, the United States is currently “doing some preliminary studies on whether it is possible to provide fighter jets to the Ukrainians. However, Kirby warned that this is not something that could happen easily, as the integration and use of modern fighter jets equipped with sophisticated equipment and weaponry, takes time.”

“There is a striking shift between how Montenegrins and Macedonians feel about Russia and what their politicians are being forced to do by Brussels, the EU and NATO. This is an attempt to turn them into a 'tool' in the anti-Russian game,” he said.

In his words, this is "the same thing that Ukraine and a number of other Eastern European countries tried to do." He added that the West had previously fueled Russophobic sentiments in these two countries.

Lavrov positively assessed the decision of the Synod of Bishops of the Serbian Orthodox Church (SOC) to return the Church in North Macedonia to its composition.

"I assess this (restoration of eucharistic communion between the Serbian and Macedonian churches) only positively. I think this is a reasonable decision of the Orthodox Church and of Patriarch Porfiry," he said in the interview for the Nashe Kino association.

According to the minister, "this is a worthy response to the intrigues of the Patriarch of Constantinople".

"He tried to bury forever any relations between the other Orthodox churches, above all between the Serbian and the Macedonian, Lavrov said. - This provocative plan was thwarted."

The head of the Russian Foreign Ministry called the decision to restore Eucharistic communion between the Serbian and Macedonian churches a wise one.

"This allows for the resumption of Eucharistic communion with the Russian Orthodox Church, which we are interested in. I am convinced that this will serve the good of Orthodoxy," Lavrov said.

Lavrov begins tomorrow from Egypt a tour of Africa in search of allies as his country struggles with international isolation over the invasion of Ukraine, Reuters reported.

After his meeting in Cairo with the members of the Arab League, the Russian first diplomat will visit Ethiopia and Uganda, which have strained relations with the West, as well as the Republic of Congo.

Egypt maintains close strategic and economic relations with Russia, from which it buys wheat and weapons, and before the war also hosted Russian tourists. This week, Russia's state corporation Rosatom began long-delayed construction of Egypt's first nuclear power plant, the biggest bilateral project since the construction of the Aswan Dam in 1970.

Diplomats said several Western countries had urged Egypt and Arab League members not to accept Russia's version of events in Ukraine. The West's attitude to the war in Ukraine has met with limited approval among Arab and African countries, H. A. Hellier of the British think tank "Royal United Services Institute" reminded Reuters.

Still, for Egypt, relations with the US remain paramount and in line with the Western position, Cairo recently refused to accept at least one Russian shipment of grain that Ukraine said was stolen from the occupied territories, the news agency noted.

Russia, Turkey, Ukraine and the United Nations signed an agreement to export the grain

In Istanbul, an agreement was signed on the UN plan to unblock the export of Ukrainian grain in the conditions of war and to allow Russia to export grain and fertilizers, "Hurriet" reports.

The signing ceremony at Dolmabahçe Palace in Istanbul was attended by UN Secretary-General Antonio Guterres and Turkish President Recep Tayyip Erdogan. On the Russian side, the document was signed by Defense Minister Sergei Shoigu. Before that, Ukraine signed its part of the agreement - also with Turkey and the UN. Russian Defense Minister Sergei Shoigu and Ukrainian Infrastructure Minister Oleksandr Kubrakov signed separate but identical agreements with UN and Turkish officials to resume blocked Black Sea grain shipping routes. Ukrainian officials said they did not want to put their names on the same document with the Russians because of the five-month war.

Erdogan said that "the conflict in Ukraine will end at the negotiating table."

Turkish President Recep Tayyip Erdogan - a key player in the talks who has good relations with both Moscow and Kyiv - said he hoped the deal would pave the way for eventual peace in Ukraine.

"I hope that this joint step we are taking with Ukraine and Russia will revive the path to peace," the Turkish leader said.

Erdogan called the Istanbul food meeting "historic", saying the agreement between Ankara, Moscow, Kyiv and the United Nations would prevent the risk of world hunger.