Bulgaria: A Military Munition Washed Up on the Beach between Pomorie and Aheloy (UPDATED) 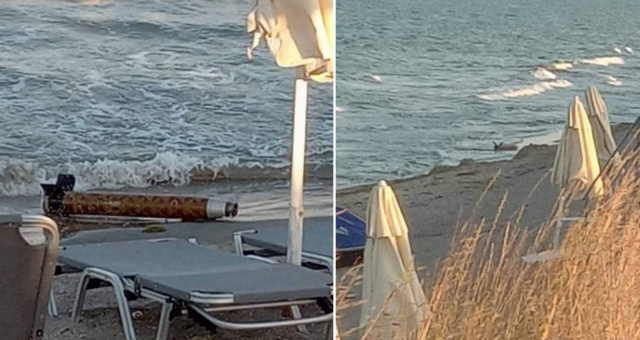 An unidentified object of probable military use washed up on the beach between Pomorie and Aheloy late yesterday afternoon. The initial assumptions of vacationers in the area of ​​the find and of users who commented on photos posted on Facebook were that it was a torpedo.

The find, which looks like a rocket or torpedo with stabilizers, was spotted by tourists on the beach of one of the large hotels in the area. The vacationers reported to emergency number 112. Police teams were sent to the scene. A team from the Naval Base in Atia has also arrived and collected the ammunition for disposal.

"This is an empty starter motor of an anti-aircraft missile," Admiral Kiril Mihailov, commander of the Bulgarian Navy, commented a little later on Friday to the BNR. "The object is completely safe, it is part of a missile that fell into the sea", he explained.

According to an expert consulted by OFFNews, the photo shows the first stage, a booster, from a 57E6 missile of the Pantsir air defense system, which is in service with the Russian army. The accelerator can be recognized relatively easily by the external coating. The first stage has a very specific coverage that MLRS systems or other anti-aircraft systems do not have, the expert commented.

A week ago, the Bulgarian Navy announced that they had found the remains of an ammunition not far from Kamen Bryag. It is not dangerous for people, but creates a problem for navigation, the Navy said at the time.