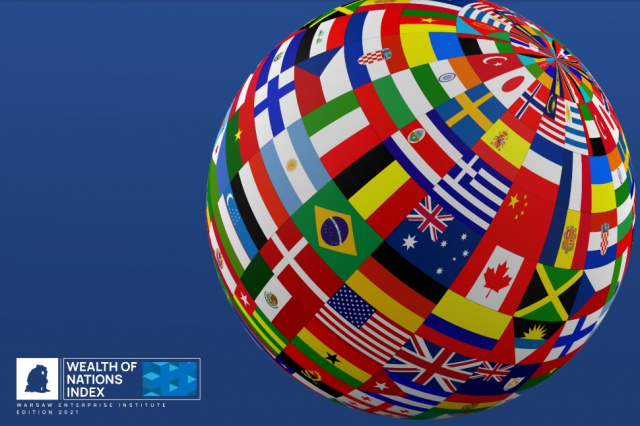 The Wealth of Nations Index is an innovative measure of economic development created by the Warsaw Enterprise Institute. Out of 38 classified countries (EU+OECD), Bulgaria ranks 36th. This is a rise of one notch compared to the previous edition. Ireland along with Switzerland and the United States are the top 3 countries on WNI.

What does the Wealth of Nations Index measure?

– "It is based on two pillars. Private per capita spending and quality-rated public spending. We don't want to compete with a measure such as GDP, but awareness of the inadequacies of this traditional indicator makes us look for alternatives that show economic reality in what we think is an instructive way" – explains Sebastian Stodolak, the man behind the idea and a vice-President of the Warsaw Enterprise Institute.

In the latest edition, almost all ranked countries scored a decline in WNI indications. All but two - Poland and Ireland, although the latter is an exceptional country due to the structure of Irish GDP, bloated thanks to the depreciation of assets transferred to the country for tax reasons by multinational companies. Poland scored 61 points this year - 0.8 more than a year earlier (1.3 percent y/y growth). It owes this to the still-unflagging stream of spending in the private economy and a gentle uptick in the rating for public spending (from 58.8 to 61.2 points), whose importance has increased during the epidemic. The highest declines in absolute numbers were recorded in Spain (-7.6), the United Kingdom (-6.7) and Austria (-6.4); in absolute numbers relative - in Spain (-10%), Greece (-9.8%), the United Kingdom (-7.9%) and Croatia (-7.8%).

Both components of the WNI are responsible for the declines: we have seen a crisis in private spending and a decline in the quality of public spending, with the former component dominating as the cause of lower WNI results this year than last.

The author of the method and calculations is Karol Zdybel, an economist and doctoral student in the European Doctorate in Law and Economics program at the Universities of Bologna, Hamburg and Rotterdam. Zdybel explains that the second edition of the Wealth of Nations Index has been expanded to include OECD countries. Therefore, decreases or promotions only apply to EU countries already classified. "More importantly, this year's edition brought significant changes both in the index itself and in the prevailing global economic conditions. A year ago, we measured the stream of economic benefits per citizen as of the beginning of 2020 - i.e. before the COVID-19 virus outbreak. This year's edition takes us to the end of the first year of the pandemic. It thus describes the reality in the midst of the economic and social crisis the world finds itself in due to the disease itself, as well as the countermeasures taken by governments and private actors." Other changes include the emergence of a new category for evaluating public spending - freedom of speech and association, which we assume is correlated with the transparency of public finances, and transparency with their quality. This category is all the more important because today's world is marked by competition between democratic (transparent) and authoritarian (non-transparent) regimes.