Day 144 of the Invasion of Ukraine: Nuclear-Biological Defense Specialists at the Plane Crash Site in Greece 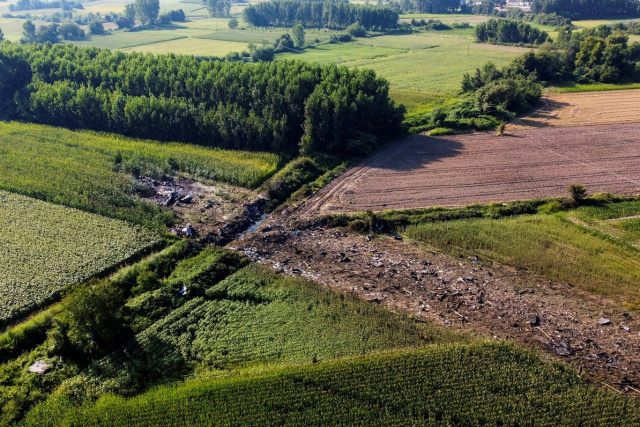 Nuclear-biological defense specialists at the plane crash site in Greece

A special team of nuclear-biological defense specialists arrived at the crash site in northern Greece, where a plane carrying a dangerous cargo crashed last night.

Next to the remains of the machine, there is a white substance of unknown origin, which the specialists are investigating. The area is cordoned off by police.

Two of the firefighters who arrived first at the scene have breathing problems. Earlier it was reported that an An-12 cargo plane of a Ukrainian airline, traveling from Serbia to Jordan with potentially dangerous cargo, crashed last night near Kavala, northern Greece.

The authorities have blocked and do not allow anyone to approach the remains of the plane. All those working at the moment are wearing special anti-radiation suits.

The crash site is being surveyed with a drone.

The head of the fire service in Northern Macedonia, Apostolidis, announced that the firefighters are waiting for permission to continue the action. The atmosphere is laden with toxic gases, firefighters say.

Electricity and water supply in the area have been interrupted. The inhabitants of Paleochori are locked in their homes. A team of military doctors is on standby for emergency response.

The plane changed its direction over Mount Athos and headed for Kavala airport, but due to a burning engine, it did not reach the airport.

If it had fallen over a populated place, the victims would surely have been more than a thousand people, local residents report.

Ukrainian diplomats arrived on the scene to find out about the death of the crew.

There were no survivors in the plane crash in northern Greece. All eight crew members died, as confirmed by the Ukrainian airline "Meridian Cargo" - the owner of the aircraft.

The plane took off from Belgrade, and according to the Serbian authorities, there were weapons and mines on board for Bangladesh.

The plane that crashed near Kavala was carrying mines to Bangladesh, Serbia's defense minister said

The Minister of Defense of Serbia, Nebojsa Stefanovic, stated today that the plane that crashed near Kavala was owned by the company "Meridian Ltd." from Ukraine, Tanyug reported. The plane that took off from Nis was carrying 11.5 tons of production of the Serbian defense industry to Bangladesh, whose Ministry of Defense bought this production. At an emergency press conference, Stefanovic stated that the plane took off at 8:40 p.m. from Nis and was carrying mortar mines and training mines for the final buyer Bangladesh. According to the Serbian Minister of Defense, the plane had planned technical landings in Amman, Ahmad Abad and Dhaka - as the final destination.

When the plane went down, eight crew members died, among them there were no Serbian citizens, Stefanovic said.

Experts will search the plane crash site in northern Greece today to confirm what the plane's cargo was, the AP reported at the same time. The agency added that the aircraft was an AN-12 model and crashed shortly before 11 p.m. local time, about 40 km west of Kavala International Airport. According to AP information, the final destination was Amman, Jordan. Minutes before the plane went down, the pilot told air traffic controllers that there was a problem with one of the engines and he needed to make an emergency landing. The plane was headed for Kavala airport but failed to reach the airport.

People living near the crash site were advised to keep their windows open at night, stay out of their homes and wear masks. Authorities said they did not know if any hazardous chemicals, including those contained in the batteries, were on the plane. Teams of explosives experts will soon arrive at the scene. They will be assisted by experts from the Hellenic Atomic Energy Commission, Greek authorities said. The fire department has cordoned off the area in a radius of about 400 meters.

OSCE: 1.3 million Ukrainians deported to Russia against their will

There is "proven evidence" of "methodical acts of violence" including "murders, rapes, abductions and mass deportations of civilians, which are considered systematic attacks against the civilian population" by the Russian military in Ukraine. The findings are from a report by the Organization for Security and Co-operation in Europe (OSCE) published on Thursday.

More than 300 Ukrainian citizens were used as human shields and held captive for 25 days in the basement of a school in Bucha, the authors of the report also write. Ukrainians were forced to fight against their own country. Evidence of torture chambers was also found in the suburbs of Kyiv.

The document published by the OSCE covers the period between April 1 and June 25. Experts from the international institution visited Kyiv, Bucha and Irpen, where they investigated cases of alleged violence. More than 400 dead bodies were found in Bucha, victims of alleged Russian war crimes, Tagesspiegel recalled.

There are reports of torture, rape, murder

There is also evidence of "several torture chambers separated by concrete walls," the international organization's experts wrote in their report. Bullet holes in the wall of one of the cells are an indication that these were execution sites. In another room, the bodies of five men were found. "They were covered in burns, bruises and wounds," the document states. In another part of Bucha, the bodies of 18 men, women and children were found in a basement. "Some of them had their ears cut off, others had their teeth knocked out," described observers from the organization.

Allegations of rape and sexual violence against women and girls by Russian forces "have become numerous," the OSCE said. Another report by the Council of Europe was cited, according to which 25 girls between the ages of 14 and 24, who were kept in a basement in Bucha, were gang-raped. The document, cited by CNN, said nine of them became pregnant.

Forced deportations of over a million Ukrainians

The report concluded that 1.3 million Ukrainians were deported against their will to Russia. There is also evidence that tens of thousands of civilians were detained in the so-called filtering centers before being moved to Russian-controlled areas in eastern Ukraine.

"Approximately 2,000 children from various orphanages and children's institutions" were "transported to Russia, although they have living relatives and were in the institutions only for medical care," the OSCE also wrote.

Conscription "is imposed on all local men between the ages of 18 and 65 in Russian-controlled areas of the Donbas, as well as Kharkiv, Kherson and Sumy oblasts," the report said.

Many countries condemned Russia during the G20 talks

Many of the Group of 20 economies condemned Russia's invasion of Ukraine and called on it to end the war during ministerial talks in Indonesia, the host said in closing statements early Sunday.

A two-day meeting of finance ministers and central bank governors in Bali ended without a joint communique because of disagreements with Russia over the war.

But Western countries have pressured Russia over the military assault, accusing Moscow of shaking up the global economy and its technocrats complicit in alleged war crimes committed during the invasion.

"Many members agreed that the global economic recovery has been delayed and faces a serious setback as a result of Russia's war against Ukraine, which has been strongly condemned and called for an end to the war," Indonesia's statement said.

Jakarta, which balances its neutral foreign policy stance with hosting the G20 summit in November, replaced the joint communique with a 14-paragraph chairman's statement that does not fall under the forum's banner and includes two sections on differences among members.

"One member expressed the view that sanctions are exacerbating existing problems," the statement said, apparently referring to Russia, which has denied any blame for the current global economic woes.

There was also no consensus within the G20 on the global food crisis, exacerbated by Russia's invasion, which threatens to put millions in developing countries at risk of starvation.

"The majority of members agreed that there is an alarming increase in food and energy insecurity," Indonesia said.

"Many members are ready to take swift collective action."

The failure to come up with a joint communiqué came a week after Russian Foreign Minister Sergei Lavrov walked out of G20 talks in Bali over criticism of Moscow.

Russia sent only a deputy minister to the financial negotiations, and its finance minister participated online.

In other areas, all members reaffirmed their commitment to implementing changes to international tax rules due to enter into force in 2024, coordinating policies to control the Covid-19 pandemic and tackling rising inflation and climate change.

The next meeting of G20 finance ministers will take place in October in Washington.