Von der Leyen in Skopje: The Macedonian Language and Identity are Recognized by the EU 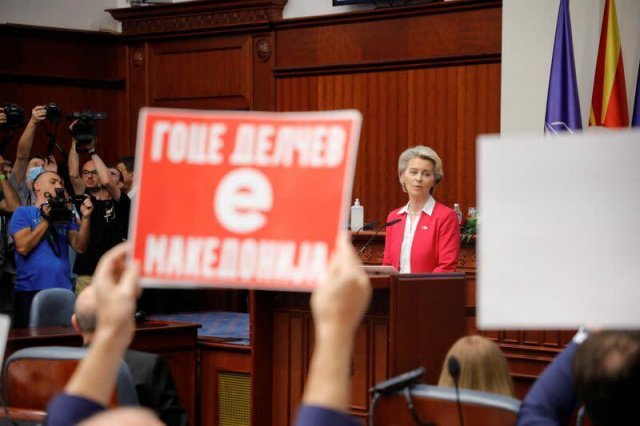 North Macedonia must take a step forward towards the European Union, European Commission President Ursula von der Leyen told the Macedonian parliament ahead of a meeting where lawmakers are debating the so-called “French proposal” to start EU negotiations.

Von der Leyen concluded her address to the Macedonian MPs with a quote from the late President Boris Trajkovski:

She emphasized that the Macedonian language and Macedonian identity are recognized by the European Union.

Negotiations for North Macedonia's membership in the EU could start as early as next week if the country decides to support the French proposal. The intergovernmental conference could start in a few days. The President of the European Commission also said this before the Assembly in Skopje. Her words that the interpretation of history was not part of the negotiation process were met with applause.

It is expected that the proposal will gather a majority - 70 parliamentary votes in the 120-seat parliament.

While Ursula von der Leyen delivered her message from the rostrum of the Parliament, opposition MPs stood with posters and T-shirts reading "NO!".

There were also posters with the inscriptions "People's traitors", and a member of the left had even put a sheet with the inscription "NO!" on the tribune in front of the President of the EC. In the plenary hall of the Parliament, the opposition side not only did not applaud Von der Leyen, but even whistled.

Outside in front of the parliament, protesters against the French proposal had gathered since lunchtime and listened to the speech of the president of the European Commission with cheers and boos.

Demonstrators in front of the parliament left footprints with red paint on the street. Some of them managed to enter the lawns between the metal fences and the police cordon, Skopje media reports. Two people were arrested after pelting the Parliament building with eggs. Stones and toilet paper were also flying towards the parliament. The city center has been under increased police protection since morning and is closed to cars.

Minutes after the start of the session of the parliament in Skopje to discuss the proposal for a negotiating framework with the EU, a one-hour break was given. The request for the interruption was made by the MP from VMRO-DPMNE Dafina Stoyanovska.

Earlier, she demonstratively cut short the proposal for a negotiating framework and announced that she wanted a one-hour break "so that they can think about it and get this document back where it belongs - in the government".

In his words, the SDSM now shows that it is the pro-European party in the RNM and, according to him, this will be appreciated by Brussels:

"There won't be a big cataclysm if elections come - extraordinary or in 2024, when they are on schedule - then SDSM will have all the support of North Macedonia's western partners."