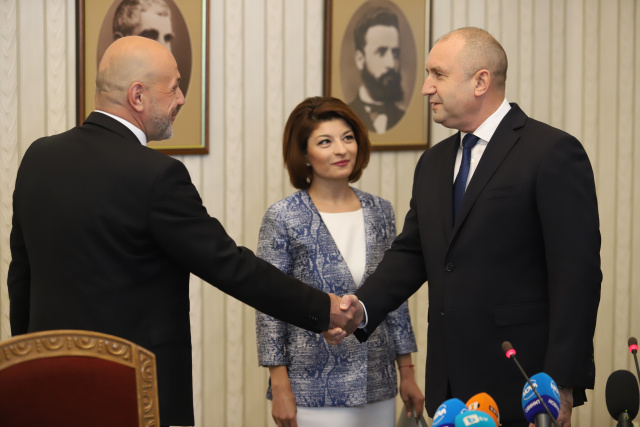 GERB-SDS did not take the exploratory mandate to form a government within the framework of the 47th National Assembly. The party's refusal was announced by the chairwoman of the parliamentary group Desislava Atanasova.

Radev indicated that he respects the party's decision not to take advantage of the right to nominate a candidate for prime minister. "You have repeatedly declared this decision of yours. But in the parliamentary republic, it is the parliamentary represented political parties that are directly responsible for broadcasting a governing majority and forming a government," he said.

The head of state said that regardless of whether they are in government or in opposition, all parliamentary parties and people's representatives have a responsibility to find a way out of the deepening crises, which have also turned into a political one.

"Inflation, the social and health crisis - they all directly affect the lives of Bulgarian citizens and require urgent action from the responsible institutions," Radev is categorical.

This leads to the last chance to form a government in the current parliament - the third mandate. For this reason, Radev started new consultations with the parliamentary parties. The meetings at "Dondukov" 2 Street will be held on Friday.

"To hear how they see a way out of the crisis that has arisen, what opportunities they see for coalition talks to seek a majority within this parliament, what priorities and programs they can seek unification around, in order to decide who to give the third mandate to," the head of state explained about the consultations.

According to Radev, the issue of power does not negate the responsibility towards the citizens and the state, which all political forces bear. "Bulgarians expect politicians to put decisions and the protection of the national interest above party interests," the president concluded.