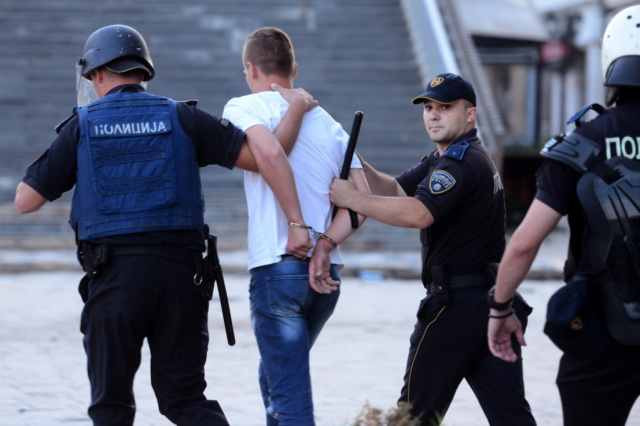 For the fifth night in a row, a protest organized by the VMRO-DPMNE of Hristijan Mickoski and the pro-Russian Left of Dimitar Apasiev took place in Skopje against the French proposal to start negotiations for membership of North Macedonia in the EU, reported BGNES.

The protest started at 19:00 p.m. local time. Right from the start, the crowd started chanting against Foreign Minister Bujar Osmani, whom the crowd called "Bugar Osmani"(Bugar = Bulgarian). And the same night, posters with anti-Bulgarian and anti-European messages, including vulgar inscriptions, were distributed to the demonstrators.

Mickoski personally came to shake hands with the organizers of the protest last night as well. Shortly after 8:00 p.m., the protesters went to the building of the Ministry of Foreign Affairs and the Parliament, where clashes took place. Several dozen police officers were injured in the incident.

In addition, last night, not far from the "Mavrovka" Shopping Center, there were clashes with a group of Albanian youths who threw stones and other objects at the demonstrators. Gunshots were heard. It is not yet clear if there were any injuries in this incident.

Today in the National Assembly in Skopje, the first consultations with party leaders regarding the French proposal were held. VMRO-DPMNE "requested 6 amendments" and called for new protests.

47 police officers were injured during a protest on July 5.