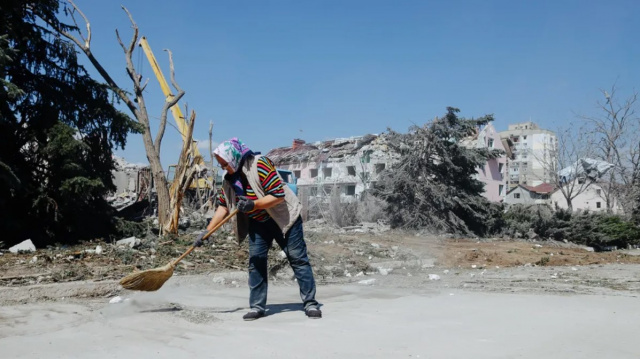 Powerful explosions early this morning in Mykolaiv reported the mayor of the Ukrainian city. It is not known what caused them, but local authorities are urging people to stay indoors.

In recent days, Russia has fired dozens of missiles at Ukraine. 21 people were killed in Russian missile strikes in Odessa region, President Volodymyr Zelensky confirmed in a statement, adding that at least 40 people were injured.

"In the Odesa region, work continues on clearing the debris from the missile strike on Sergeevka. Three rockets hit a residential building. 160 people lived there, civilians. This strike also destroyed a recreational camp, quite typical of such a coastal area. This is deliberate, purposeful Russian terror, not some mistake or accidental missile strike," Volodymyr Zelensky was categorical.

Ukraine has accused Russian forces of shelling Snake Island in the Black Sea with phosphorus bombs. A day earlier, the Russian army announced that it had withdrawn from this strategic island "as a sign of goodwill" because it had achieved its objectives. The General Staff of the Ukrainian army released footage of a plane dropping two bombs over the island. Meanwhile, the United States announced they are sending $820 million in new military aid to Ukraine. This includes surface-to-air missile systems and radars.

Russia withdrew from the Council of Europe agreements

Russia has terminated its participation in eight partial and extended agreements of the Council of Europe. The document from June 28, signed by Prime Minister Mikhail Mishustin, has been published on the legal information portal.

In this regard, 14 acts or regulations have been repealed. Russia withdrew from the Council of Europe in March after 26 years of membership. Earlier, a day after the beginning of the Russian military operation in Ukraine, the Committee of Ministers of the Council of Europe limited the rights of Russia in this organization and in its Parliamentary Assembly (PACE). On March 14, PACE notified the Russian delegation of the suspension of its membership in the assembly, later voting to expel Russia from the CE.

The Russian Foreign Ministry explained the decision to withdraw from the Council of Europe with the abuse of the absolute majority of the EU and NATO countries in the Committee of Ministers of the Council of Europe, which becomes a continuation of the "line of destruction" of this organization.

Later, the Deputy Chairman of the Federation Council, Konstantin Kosachev, said that Russia intends to denounce the Charter of the Council of Europe (CoE), the European Convention on Human Rights (ECHR) and four other conventions, as well as a number of documents that do not comply the interests of the state.

Russian political leaders are talking about lifting the moratorium on capital punishment.