Henry Kissinger: There are Three Possible Ways Out of the War in Ukraine 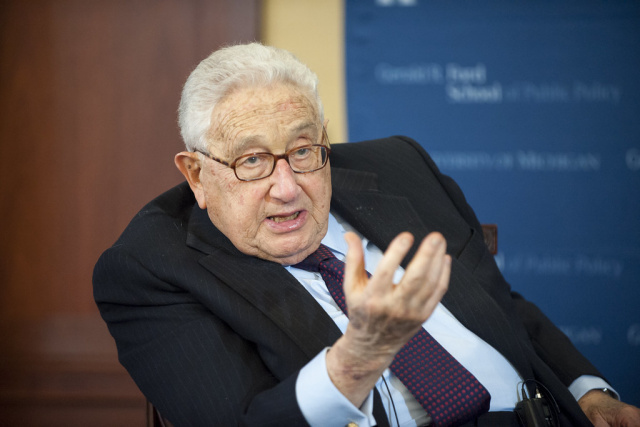 “At the last meeting in Davos, I said that the dividing line between Russia and Ukraine must return to the previous status quo, because continuing the war beyond that point could turn it into a war not for the freedom of Ukraine, but a war against Russia. For this, I was subjected to a lot of criticism, not least from Mr. Zelensky. The purpose of the Davos statement was to point out that the question of the aims of the war must be addressed before the momentum of the war makes it politically unmanageable.”

“The basic framework is this: there are three possible outcomes of this war - and all three are still somewhat open.”

“If Russia stays where it is now, it will have conquered 20% of Ukraine and most of Donbas, the main industrial and agricultural area, as well as a strip of land along the Black Sea. If it stays there, it will be a victory, despite all the setbacks they suffered early on. And NATO's role would not have been as decisive as previously thought.”

“The other way out is to try to push Russia out of the territories it has already acquired before this war, including Crimea, and then there will be the question of war with Russia itself if the war continues.”

“The third outcome, which I sketched in Davos, and which I think Zelensky has already accepted, is that if the Free World succeeds in preventing Russia from making any military gains, and if the battle line returns to when the war started, then the present aggression will be visibly defeated. Ukraine will be restored to the way it was at the beginning of the war: the battle line after 2014. It will be rearmed and closely associated with NATO, if not part of it. The rest of the issues will be a matter of negotiation. This will be a situation that will be frozen for a while. But as we have seen with the unification of Europe, over a period of time they can be achieved.”

“Given that we’re only talking about the occupation by Russia of 2.5 percent of the country and Crimea, which is another 4.5 percent, whose attitude to the region is different from that of a pure Ukrainian because it has been Russian for hundreds of years. I will not give estimates on what the outcome of the negotiations should be. But if the Allies succeed in helping the Ukrainians drive the Russians out of the territory they have conquered in this war after February 24, they will have to decide how long the war should last.”

“If the war ends as I sketched it at Davos, I think it will be a significant achievement for the Allies. NATO will be strengthened with the accession of Finland and Sweden, which will create an opportunity to defend the Baltic countries. Ukraine will have the largest conventional ground forces in Europe associated with NATO or its member. Russia will be shown that the fear that has hung over Europe since the end of the Second World War - of the entry of a Russian army, a conventional army entering Europe across established borders - can be prevented by conventional NATO action. For the first time in its recent history, Russia will have to face the need to accept co-existence with Europe as a whole, rather than America being the main element in the defense of Europe with its nuclear forces.”