EU Adopted a Package of New Sanctions against Russia 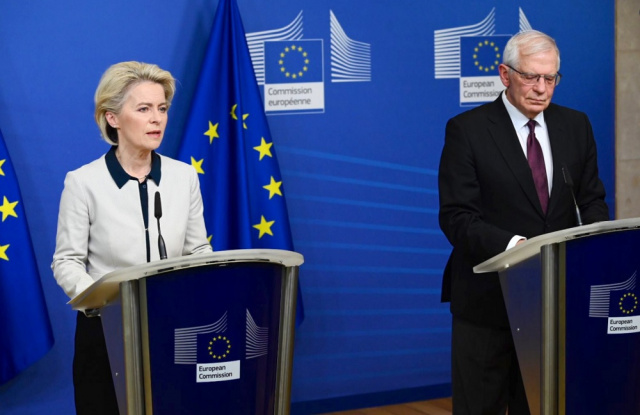 European leaders adopted a package of sanctions against Russia in 5 key areas - financial, energy, transport, export controls, a ban on financial exports and visa policy. This was said after the meeting, which lasted until late at night, said the President of the European Commission Ursula von der Leyen.

“President Putin has chosen to return the war to Europe, and we are currently witnessing a full-scale intervention in Ukraine”, Von der Layen said. “We will hold the Kremlin responsible for this”, she said. Regarding financial sanctions, she explained that they cut Russia's access to the most important capital markets:

“70 percent of the Russian banking market is targeted, as well as key state-owned companies, including in the field of defense. These sanctions will increase Russia's borrowing costs, raise inflation and gradually undermine Russia's industrial base. The Russian elite is also being targeted, whose deposits we are breaking so that they can no longer hide their money in Europe's tax haven.”

Our export ban will hit oil, making it impossible for Russia to upgrade its oil refineries, which have brought it revenue of 24 billion euros in 2019, she added.

The sanctions include a ban on the export of all aircraft, as well as parts and equipment for Russian airlines. This will hit key sectors of the economy and connectivity, as 3/4 of Russian aircraft are built in the EU, the US, and Canada. Access to key technologies such as semiconductors is being restricted, and diplomats and business will no longer have privileged access to the EU.

The world is waking up in the context of war, said French President Emmanuel Macron. He added that the sanctions are also aimed at Belarus, which is an accomplice of the Russian regime. With regard to the protection that France will provide to its allies, incl. and within NATO he clarified:

“France will continue to play its full role as a guarantor for NATO allies by sending a new contingent to Estonia, speeding up its participation in air policing over the Baltic skies in March and also speeding up the deployment of troops in Romania.”

Both stressed that the EU has remained united in its position against the Kremlin's actions, despite its attempts to divide. Macron said he had a quick, direct and frank conversation with President Putin at the request of his Ukrainian counterpart, Zelensky, to stop hostilities and hold talks. He admitted that there was no result.

High Representative for Foreign Affairs and Security Policy Josep Borrell said yesterday that these would be the toughest sanctions the EU has ever imposed.

At this stage, Russian credit institutions will not be excluded from the international payment system SWIFT. According to German Chancellor Olaf Scholz, some sanctions should remain in the European Union's arsenal at a later stage.

At the entrance, Belgian Prime Minister Alexander de Croo said that sanctions are needed that do not bark but bite, and explained that they should mainly affect the country's military-industrial complex, as well as its elite. The Prime Minister of Slovenia, Janez Jansa, said that he understands very well the situation of the Ukrainians, as his country had been in a similar situation.

“I don't think Putin is a negotiable person,” said Finnish Prime Minister Sanna Marin. She said there would probably be migrants with whom we need to show solidarity.

Asked if the Russian president could invade other European countries, Josep Borrell said: “Nothing is out of the question with Putin.”

In a speech to European leaders, European Parliament President Roberta Metsola called for “massive, unprecedented and harsh” sanctions against Russia, including and “more far-reaching” such as excluding Russia from the SWIFT system. She called for measures to include individual sanctions, without excluding anyone from them. Metsola described the suspension of Nord Stream 2 certification as the right decision, adding that the sanctions came too late after the unthinkable had already happened.

Meanwhile, European leaders have called for additional measures against Belarus.