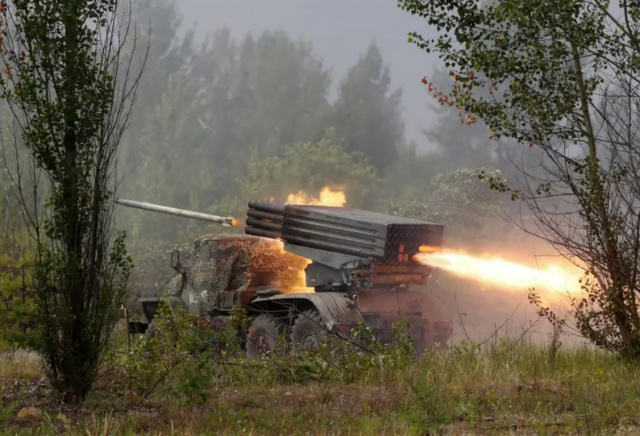 Russia has launched a full-scale air and ground operation against Ukraine. A series of explosions shook a number of cities in all parts of the country at 5 a.m. this morning, and then Russian troops invaded Ukraine from three sides - the borders with Belarus and the border with Russia and the annexed Crimean peninsula. There were also reports of casualties - seven people were killed in the bombing of Russian forces, and the Ukrainian army claimed to have killed “about 50 Russian occupiers”.

“The situation is under control, 50 Russian occupiers have been killed. Another Russian plane was shot down in Kramatorsk district. He is the sixth”, announced the Ukrainian General Staff on Twitter shortly before 10.30 a.m. Bulgarian time. Four tanks were set on fire on the Kharkiv bypass. An adviser to the Ukrainian president said that 3 civilians and 40 Ukrainian soldiers had been killed and dozens more wounded, Reuters reported.

Explosions continue to shake various parts of Ukraine at this time.

The first explosions erupted this morning in Kyiv, followed by a number of cities - in Kharkiv in the northeast, in Kramatorsk, Dnieper, Mariupol, Odessa and Zaporizhzhia. At the same time, Russian troops and military equipment invaded Ukrainian territory in 5 districts - Luhansk, Sumy, Kharkiv, Chernihiv and Zhytomyr regions.

An hour ago there was shelling in Odessa.

Heavy fighting is currently taking place around Kharkiv, according to the Ukrainian army. A military attack with tanks was repulsed there.

Melitopol - an airstrike against a military base, there are casualties at the airport, said Ivan Fedorov - mayor of the city.

Access to the city of Mariupol is under the control of the Azov Special Regiment, which was formed by volunteers during the 2014 events.

The Ukrainian army reports that the separatists have established control over two villages in the Luhansk region - Gorodishte and Melovo.

Ukraine's missile defense has been activated by strikes on military airports and military depots.

According to the Ukrainian Armed Forces, 6 Russian aircraft and one helicopter were shot down. The Russian military denies the allegations.

Ukrainian President Volodymyr Zelensky has announced that all willing Ukrainians will be given weapons, and earlier martial law and mobilization were declared - 25 territorial defense brigades are being set up in all areas, as well as 150 battalions.

“Dear citizens of Ukraine, today Russian President Putin announced a special military operation in Donbas. Russia has struck at our military infrastructure. We are imposing martial law and I ask you to stay at home! I spoke with US President Biden and received assurances of support. Don't panic, we are strong and ready for anything, we will win!” Zelenski said in a video address.

He declared martial law, which was approved by the Verkhovna Rada in Kyiv shortly before 12 o'clock.

Last night it became clear that Vladimir Zelensky tried unsuccessfully to talk on the phone with his Russian counterpart Vladimir Putin.

In the capital Kyiv and in the city of Lviv to the west, the sirens for air defense were activated at 7 o'clock in the morning. People are leaving the cities en masse, and mayors are urging them to stay at home. Today, schools, kindergartens and universities are closed. In the Ukrainian capital, Kyiv, there are queues in front of gas stations and ATMs as people try to leave. They are all heading west.

The Ministry of Internal Affairs of Ukraine stated that conditions have been created for welcoming refugees in Transcarpathia to the border with Slovakia - the westernmost point of Ukraine.

In Kyiv, people use subway stations as a refuge from airstrikes. Tatiana Dotsenko, a lecturer at Taras Shevchenko University in Kyiv, talks about the situation in Kyiv.

“Everything alive is exported from Kyiv, there are queues at gas stations, mainly heading to western Ukraine. ATMs are working for now, big queues. Until recently, we believed that the issue would be resolved at the level of diplomacy. We didn't really expect it. The panic is felt, unfortunately,” Tatiana Dotsenko told BNR.

A general evacuation has been announced in the Ukrainian-controlled territories of the Luhansk region.

Ukraine today terminated all diplomatic relations with Russia, said the presidential administration of Vladimir Zelensky. The Ukrainian president called on the leaders of the United States, Germany, Britain, Poland and the European Union to form an anti-Putin coalition immediately.

Ukrainian Foreign Minister Dmytro Kuleba wrote on Twitter: “Putin has launched a full-scale invasion of Ukraine, peaceful Ukrainian cities are under attack. This is a war of aggression. Ukraine will defend itself and win,” Kuleba said, adding: “The world must and can stop Putin. The time for action is now.”

Russia's Defense Ministry has said that Ukraine's air defenses have been neutralized, military airport infrastructure has been shut down and Ukrainian border guards have offered no resistance.

The military department in Moscow emphasizes that they do not strike at Ukrainian cities and the civilian population is not threatened by anything.

The ministry also denied reports in foreign media about a downed Russian plane.

The ministry clarified earlier that the military infrastructure, air defense, military airports and aviation of the Ukrainian armed forces are being destroyed with high-precision means of destruction. And they assured that there is no danger for the civilian population.

President of Belarus Alexander Lukashenko has stressed that the country's armed forces are not participating in the Russian operation.

Ukraine's ambassador to the United Nations has called on member states to end the war at an emergency Security Council meeting. It is the responsibility of this institution to stop the war, said Sergei Kislitsa.

Today, Bulgarian Foreign Minister Teodora Genchovska was to visit Ukraine together with the first diplomats from Lithuania, Latvia and Estonia. The trip has been canceled. The Ministry of Foreign Affairs is working on the crisis headquarters for the situation in Ukraine.

In need of assistance, Bulgarian citizens in Ukraine can contact the Bulgarian Embassy in Kyiv and announced telephone lines for compatriots and the Consulate General in Odessa.