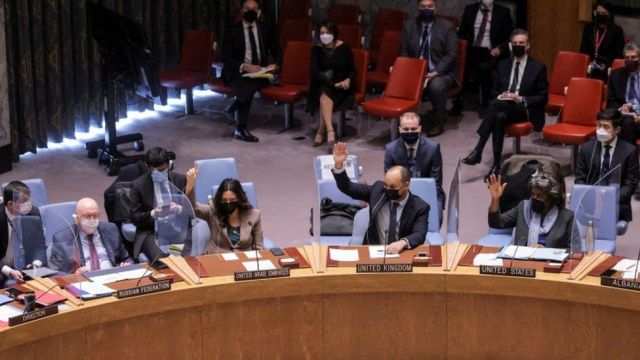 A majority of the UN's Security Council condemned Russia's decision to recognize two independent breakaway republics in eastern Ukraine and Russian President Vladimir Putin's order to send Russian troops there at an extraordinary meeting last night, agencies reported. During the same meeting, the Russian representative in the Security Council assured that Moscow is open to diplomacy.

“Ukraine's internationally recognized borders will remain unchanged, regardless of Russia's statements and actions,” Ukraine's Permanent Representative to the UN Serhiy Kislytsia told the meeting. “Ukraine calls on Russia to annul its decision to recognize the independence of breakaway Ukrainian territories and return to the negotiating table, as well as to proceed with an immediate and verifiable withdrawal of the occupying forces,” he added.

At the beginning of the meeting, the United States, through the voice of its permanent representative to the UN Linda Thomas-Greenfield, described as absurd Russia's order to deploy Russian forces in eastern Ukraine, which Moscow calls “peacekeeping forces”, Reuters reported. The US spokeswoman added that Moscow's recognition of the two breakaway regions in eastern Ukraine as independent was part of Moscow's attempt to create a pretext for further invasion of Ukraine. Thomas Greenfield added that the consequences of Russia's actions would be dire in Ukraine, Europe and around the world, and that if Russia invaded Ukraine, the humanitarian consequences would be significant.

For their part, Russia's permanent representative to the UN, Vasily Nebenzya, said Russia remained open to diplomacy, to finding a diplomatic solution. “However, we do not intend to allow a bloodbath in Donbas,” he added.

During the extraordinary meeting, a number of permanent representatives, such as those from France, Norway and Ireland, condemned Russia's actions against Ukraine. Permanent Representative of Albania Ferit Hoxha asked: “Who will be the next to be invaded?”

British Permanent Representative Barbara Woodward called on Russia to take a step back, while Brazil called for an immediate ceasefire in eastern Ukraine. Kenya's Permanent Representative Martin Kimani has expressed strong concern over news from Russia that it recognizes the independence of two territories in Ukraine and that it will send troops to the east of the country. Both Ghana and the United Arab Emirates were critical of Russia at the meeting.

China has distanced itself from its partners and has not explicitly condemned Russia. “All countries must resolve their international differences by peaceful means in accordance with the goals and principles of the UN Charter,” said Zhang Jun, Beijing's permanent representative to the Security Council. He called on all parties to exercise restraint.