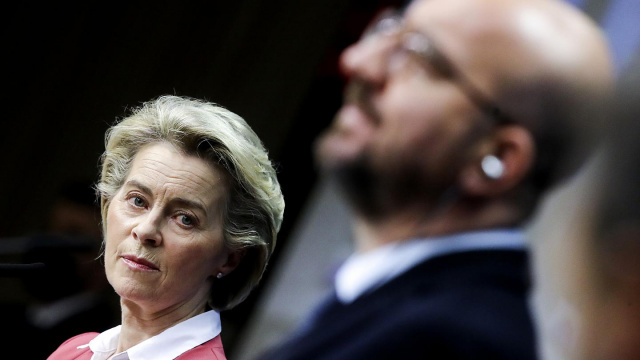 The EU and NATO tonight condemned Russian President Vladimir Putin's decision to recognize the independence of Donetsk and Luhansk. “We strongly condemn this step, which is in clear contradiction with international law and the Minsk agreements”, was stated in a joint statement by the Presidents of the European Council and the European Commission, Charles Michel and Ursula von der Leyen.

The EU will respond with sanctions against those involved in this illegal act and reaffirms its unwavering support for Ukraine's independence, sovereignty and territorial integrity within internationally recognized borders, they added.

The EU and its partners will respond unitedly, firmly and decisively, in sympathy with Ukraine, European Parliament President Roberta Metsola said in a statement.

The recognition of the two separatist territories in #Ukraine is a blatant violation of international law, the territorial integrity of Ukraine and the #Minsk agreements.

The EU and its partners will react with unity, firmness and with determination in solidarity with Ukraine.

NATO Secretary-General Jens Stoltenberg wrote on Twitter that he condemned Moscow's actions. According to him, this undermines the efforts to resolve the conflict. “We call on Russia to stop fueling the conflict and choose diplomacy”, he added.