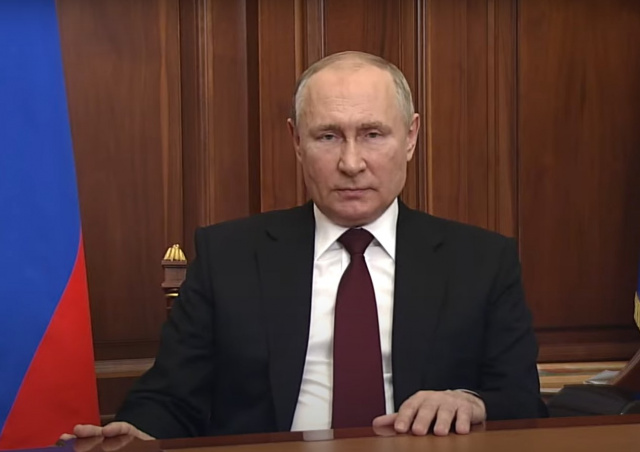 Russian President Vladimir Putin said in an address to the Russian people that he recognized the Donetsk and Luhansk People's Republics as independent states. At the end of the address, Vladimir Putin signed presidential decrees recognizing the republics and signed agreements on friendship and cooperation. Shortly before that, he told the leaders of France and Germany that Russia would recognize the self-proclaimed “republics”, according to a statement on the Kremlin's website.

In a long speech that began with historical explanations that Ukraine is part of Russia, he said that “Kyiv's ruling elite is constantly declaring its unwillingness to implement the Minsk agreements” and is preparing for a “new blitzkrieg” in Donbas, something Ukraine denies). No matter how the deputies in parliament change, the nationalist regime in Kyiv “does not change in essence”. “In this regard, I intend to accept the decision to recognize the Donetsk and Luhansk People's Republics,” he said.

Putin said the situation in eastern Ukraine had become critical again and stressed that Ukraine is an integral part of his country's history.

“Once again I want to emphasize that for us Ukraine is not just a neighboring country. It is an integral part of our own history, culture and spiritual space. These are our comrades, relatives, among whom we have not only colleagues, friends but also people who have blood and family ties with us,” he said. According to him, Ukraine was created by Russia, and more precisely by Bolshevik Russia and Lenin, and after World War II Stalin added to Ukraine territories from Romania and Poland.

In his nearly hour-long address, Putin said that nationalism and corruption in Ukraine had replaced the historical, cultural and social interests of the people with ethnographic attributes and the plunder of citizens, and a solid statehood in Ukraine had never been formed. The sinking of various oligarchic clans and corruption are at the expense of eastern Ukraine and the interests of the people. There is no independent local government and courts, and NGOs have more rights than the judiciary, the president said.

Putin reiterated many of his points of reference in his article last summer and in recent years, talking about “de-Russification” and “forced denationalization” and attacks on “Russians trying to preserve their language and identity.”

The president also reiterated claims that “the events on the Maidan in 2014, when thousands of protesters overthrew the government, were a coup d'etat for which a lot of money was received from the United States, but ordinary people did not get anything. On the contrary, the radicals terrorized politicians and journalists against the coup.”

“In 2000, during Clinton's visit to Moscow, I asked, ‘How would the United States react to Russia's accession to NATO?’ The reaction to my question seemed restrained. And how the Americans really reacted to my question can be seen from their actions,” Putin said. He then developed his theory that NATO and its enlargement, including Bulgaria, was a threat to Russia.

Russian President Vladimir Putin has accused the United States and NATO in a televised address to the nation of turning Ukraine into a theater of war. He added that Moscow feared the deployment of NATO troops there and was concerned about US drones spying on Russia.

He also said the alliance had completely ignored Russia's security demands and accused the West of rejecting Moscow's main proposals for security guarantees.

Russia's recognition of the breakaway regions of eastern Ukraine as independent republics is in effect a unilateral termination of the Minsk agreements. They were adopted in 2014-2015 and set out the main measures to resolve the situation in Donbas.