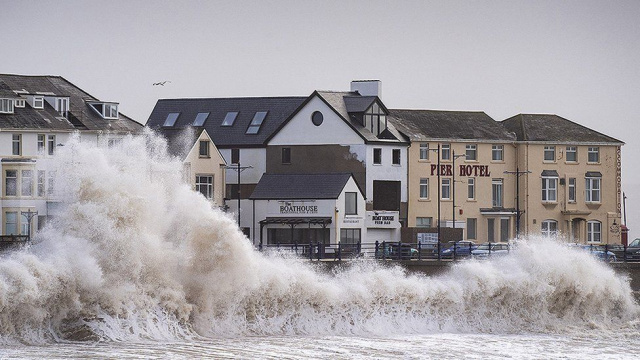 The storm Eunice hit the United Kingdom today, AFP reported. The British Meteorological Service announced yesterday a “red alert” from South West England all the way to South Wales. Winds along the coast can reach speeds of 145 km/h.

An “orange alarm” has been declared for the whole of southern England, including London. Winds of up to 130 km / h are expected in the capital. A number of royal parks are closed, as is the Millennium Ferris wheel - the famous “London Eye”.

The storm could blow various debris into the air, creating a deadly threat, damaging residential and other buildings whose roofs could be torn off and breaking power lines, meteorologists have warned. Authorities urged citizens to stay at home.

There are closed highways, bridges. Flight flights have been canceled. For security reasons, all trains in Wales have already been suspended. In the southeastern part of the country, passengers were stranded on a train between Tonbridge and Sevenoaks in Kent.

The railways are urging passengers in the country to “reconsider their plans” and stress that trains will run at reduced speeds - mostly up to 80 km/h.

“Naturally, the army is ready,” Prime Minister Boris Johnson assured yesterday during a visit to a military base.

Schools will also remain closed. About 14,000 homes in Cornwall were left without electricity. Due to the threatening forecast, Prince Charles canceled his official engagement in Wales today, his office announced and expressed hope that the event will take place later.