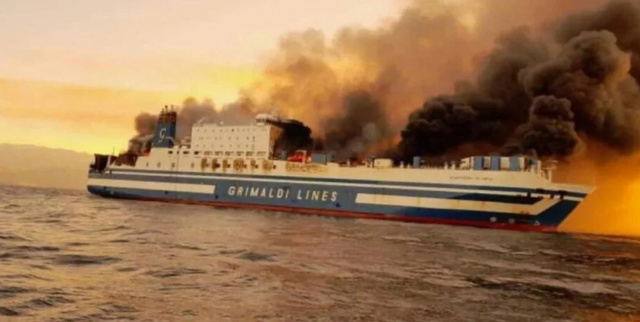 A total of 37 Bulgarian drivers of a Plovdiv company were on board the ferry, which caught fire in the Ionian Sea. 35 have been rescued, one is missing and one driver is trapped in the middle of the ship along with a Turkish truck driver. Greek police and firefighters are currently on a rescue operation to rescue the two.

Fire broke out on a Ferry with 288 People on board, sailing from Greece to Italy

“They said that boats with people were leaving to cut the ship so that they could take them out the two drivers. One is ours, the other is a Turkish driver,” Ilian Filipov, owner of the transport company, told Nova.

33 trucks of the transport company were burned, and the damage is roughly between 5 and 10 million euros.

A total of 300 people were on board. The 237 passengers and 50-member crew were evacuated by lifeboat and taken to Corfu. One person inhaled smoke and was taken to a hospital without danger to life. Two others remained stranded on the ship and a rescue operation is currently underway.

The 183-meter Italian-flagged ferry was traveling to Brindisi when it was engulfed in flames.

The captain immediately ordered the passengers to transfer to the lifeboats and called for help on the radio. The passengers were evacuated and loaded into the arriving vessels.

The cause of the fire is still unclear, but it is known that it started from the cargo compartment.

The Bulgarian Ministry of Foreign Affairs announced that they have no data on Bulgarian citizens injured in the fire. The Bulgarian Embassy in Athens and our Consulate General in Thessaloniki are in constant contact with the Greek authorities and ready to provide assistance if necessary.