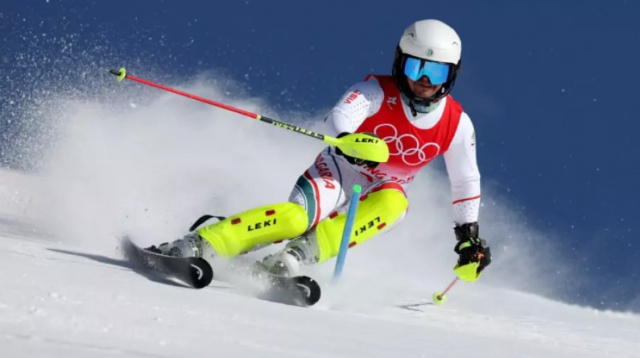 Albert Popov recorded a great performance in the slalom at the Beijing Olympics. The best Bulgarian alpine skier finished 9th in the final standings of the Ice River track in Yanqing.

He finished with a total time of both rounds 1:45.15 minutes, which ranked him among the best in the discipline.

Entering the top 10 in the slalom of Albert Popov is an outstanding achievement for Bulgaria.

Our skier kept his 9th position, which he earned with an excellent ride in the first round with a time of 54.62 seconds. He gave the 8th time in his second descent - 50.53 seconds, but remained 1.06 seconds behind the winner Clement Noel (France).

“The terrain is very touchy, the route was specific, I tried to be as clean as possible, at the same time to give gas, but when you slide like that, sometimes mistakes happen,” said Albert Popov.

The best Bulgarian achievement in this discipline is that of Petar Popangelov, who has two sixth places from the Games in Lake Placid in 1980 and Sarajevo in 1984.

The other Bulgarian representative, Kamen Zlatkov, dropped out. He started the second round very well, but due to the strong attack in the middle of the track he “hooked” one stake, which prevented him from finishing the race. After his first descent, he was in 20th place with a time of 55.66 seconds.

“I didn't care if I finished because I wanted to get a result. It was easier to arrange the route, easier even than the first one. This route was ordered by the coach of Alex Vinatzer and his goal, in my opinion, was to shake a lot more people because Vinatzer did not finish the first round”, said Albert Popov after the competition in front of BNT.

Clement Noel triumphed with the Olympic title in the discipline after he managed to climb from 6th to 1st place, winning the gold medal with a total time of 1:44.09 minutes.

The silver went to the Austrian Hubert Strolz, and the bronze went to the world champion Sebastian Foss-Solevog from Norway.

Albert Popov's 9th place in slalom is the best achievement for a Bulgarian athlete at the Beijing Olympics so far.

Before that, Popov finished 17th in the giant slalom of the Games.