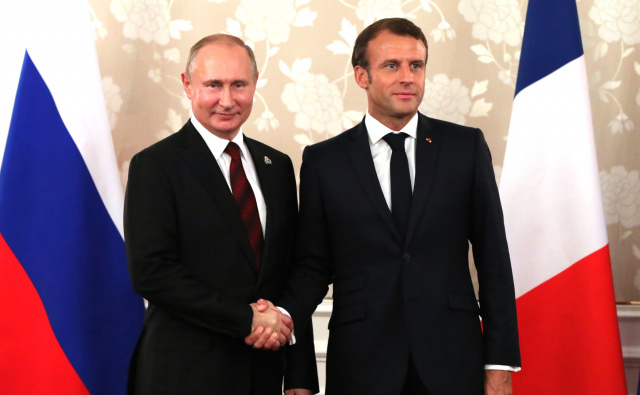 “An agreement to avoid a full-scale war in Ukraine is possible, and Russia's concerns about its own security are legitimate”, said French President Emmanuel Macron. He is in Moscow for talks on the crisis with his Russian counterpart, Vladimir Putin. The visit is part of a diplomatic shuttle to avoid conflict. Tonight, German Chancellor Olaf Scholz has his first meeting with US President Joe Biden at the White House.

“Europe needs a ‘new balance’ that protects European countries and calms Russia's concerns”, the French leader said ahead of talks in Moscow. “Russia's goal is not Ukraine, but clear rules for coexistence with the European Union and NATO,” Macron said. He warned that one-sided gestures could not be expected. According to him, the situation must now be prevented from deteriorating before the establishment of mechanisms and reciprocal gestures of trust. In recent days, Emmanuel Macron has had telephone conversations with Vladimir Putin and Vladimir Zelensky, as well as with Joe Biden. Russia has said it is aware of Macron's plans to ease tensions over Ukraine but noted that there has been nothing new in recent days on requested security guarantees.

The situation is too complicated to expect a decisive breakthrough in one meeting. Tomorrow Macron is in Kyiv. One of the goals of his tour is to buy time and freeze the situation for several months, at least until the “super-month” of April. Reuters notes that there are elections in France, Hungary and Slovenia. Now the French president wants to demonstrate European leadership with sights to the vote, although he has not yet announced his candidacy for a new term. A number of Eastern European countries are suspicious of his approach to Russia, especially when it comes to negotiating a “new European security order,” said Dmitry Peskov, a Kremlin spokesman.

In the previous Ukrainian crisis in 2015, then-German Chancellor Merkel and President Hollande went to the Kremlin together, but now Macron is without his German partner. Olaf Scholz will visit Kyiv and Moscow next week, and tonight he will discuss the crisis with US President Joe Biden at the White House.

Chancellor Scholz did not rule out his country sending additional troops to the Baltic republics. Germany is leading a NATO operation in Lithuania with 500 troops. For now, Berlin has rejected requests to send weapons to Ukraine, a position that was confirmed before the talks in Washington.

“My predecessor maintained this course, which was right and remains right. I am very excited that most Germans see the issue in the same way as I do, as the government, and as my predecessor in office,” said Olaf Scholz, Germany's chancellor.

After today's talks at EU and NATO headquarters in Brussels, Polish President Andrzej Duda is leaving for Berlin, where he will hold talks tomorrow with German Chancellor Olaf Scholz and French leader Emmanuel Macron on the Ukraine crisis.