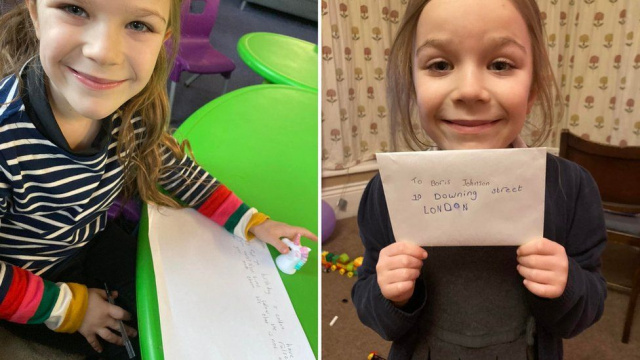 A 7-year-old British girl has asked Prime Minister Boris Johnson to apologize. She strictly observed the requirements not to attend parties during the lockdowns, unlike Johnson, who was found to have violated these rules, the BBC reported, quoted by BTA.

Little Isobel even wrote a letter to Johnson telling him how she missed two birthday parties because of the lockdowns. Isobel has two younger sisters, and it was very difficult for all of them to see friends when the rule of gathering only up to six people in one place was in force.

Isobel's parents say they are proud of their daughter's request to Johnson. They said their child felt it was unfair to follow the rules and another did not.

Isobel herself, who lives in Sheffield and hopes to celebrate her eighth birthday with friends in April, hopes Johnson will apologize and advises him not to overdo it next time.

Johnson apologized to his compatriots after Monday's presentation of investigator Susan Gray's findings about Downing Street 10 parties in violation of lockdown rules. A video has surfaced showing the prime minister dancing (without any sense of rhythm, but that was the smallest problem in the case) with a lady holding a Jedi sword.