HBO MAX is coming to Bulgaria on March 8 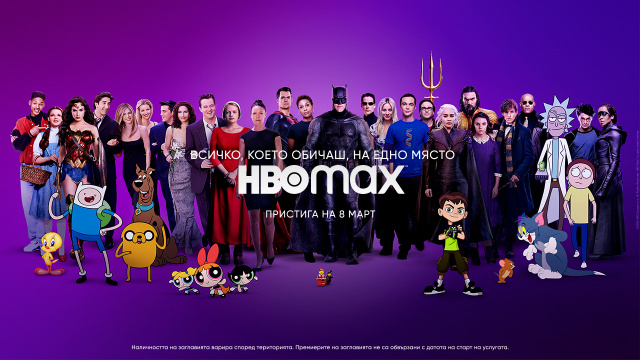 HBO Max, the new streaming platform of WarnerMedia, arrives in Bulgaria on March 8, 2022, and from that date will replace the current HBO GO platform. HBO Max offers a whole new world of high-quality entertainment from Warner Bros., HBO, DC and Cartoon Network, Max Originals and many other content producers.

When HBO Max is launched, existing HBO GO accounts will be automatically migrated to the new service, giving users instant access. Those who want to use the service directly for the first time can register now at http://www.hbomax.com and have access to it on the day of starting the service. HBO Max will also be available through select mobile operators and TV distribution partners.

HBO also shared for the first time the price of the new direct subscription service.

Currently, the monthly direct subscription for HBO GO in Bulgaria is 3.99 euros. The new HBO Max service will be available for €4.99 per month for direct subscriptions. To celebrate the arrival of HBO Max, current direct subscribers who will be automatically transferred to the new platform will pay a reduced price of only 3.30 euros per month. The gesture gives customers more than 30% (or exactly 33%) permanent discount on the monthly value, which is valid only if the subscription is not interrupted. New customers who register before March 31 will also be able to take advantage of this exclusive offer, valid for them only in the period from 08.03.22 to 31.03.22.

After March 31, in addition to the standard single monthly subscription of 4.99 euros and the permanent discount for loyal customers, a new annual subscription will be introduced, offering an exclusive offer for 12-month access at the price of 8 months. Its value is 39.90 euros.

On the occasion of announcing the launch date of Max in Bulgaria, Christina Sulebakk, General Manager of HBO Max EMEA, commented: “We are excited to confirm that on March 8 HBO Max arrives in Bulgaria. HBO Max is a new streaming experience, offering the best entertainment with original series, movies, reality formats, documentaries and children's programs from Warner Bros., HBO, DC, Cartoon Network, Max Originals and others at an incredibly attractive price - one of the cheapest for our service in Central Europe.” She also notes that HBO has had a direct presence and team in our country for 20 years, offering localized content on our market from the very beginning, and the streaming service is in the country for six years now.

As already announced, HBO Max will also offer access to Warner Bros. movies just 45 days after their premiere in theaters. Among the titles that will be available from the first day of the platform are The Matrix: Resurrections, Dune and The Williams Method.

Among the new Max Originals series are Station 11, Peacemaker, the second season of Raised by Wolves and The Sex Lives of College Girls. European series will now also be under the Max Originals brand. The continental titles that will have their world premiere in the platform include Life and Everything Else (Todo Lo Otro), Kamikaze, Lust, Ruxx, The Thaw, The Informant and Garcia!

For the first time in Bulgaria, HBO Max will have reality formats such as Expecting Amy, Finding Magic Mike, FBoy Island and Selena and the Chef (Selena + Chef), which we will be able to watch with Bulgarian subtitles. The special children's section KIDS will be even richer and will continue to offer Little Titans: Go!, Stephen Universe, The Amazing World of Gumball, CoComelon and many more selected titles from Cartoon Network, Boomerang and others. The availability of titles varies by territory, and titles will be added to the platform in stages.

Johannes Larcher, Head of HBO Max International, said: “The global expansion of HBO Max continues as planned with the upcoming launch of the platform in 15 more European countries, making us available in 61 territories around the world. We pursue our strategy of offering direct access to our service to users around the world, which, combined with our favorite content, will give us the scale we need to be one of the best global streaming platforms.”

When the HBO Max service becomes available in Bulgaria, the HBO GO application will cease to be active and the user will need to install the HBO Max application for the device they’re watching on. The access to the device is carried out with the already used e-mail and password.

HBO Max will offer fans of quality series and movies an even better viewing experience. Features include creating five custom profiles while streaming to three different devices. There is no limit for registered devices to one subscription. The service will offer 5.1 surround sound, Dolby Atmos and 4K for selected titles.

Customers who use HBO Max directly will be able to pay for their chosen subscription through the VISA, Mastercard and PayPal payment networks and by purchasing in the applications of the main online stores (Apple App Store, Google Play Store and Samsung Checkout). The promotional offer for over 30% discount in March is valid for a direct subscription to the platform, as well as with a subscription through the Google Play Store and Samsung Checkout.

As for HBO's TV channels, they will be available through partners as they are now. The change concerns only the streaming service and if the client's subscription with TV includes HBO GO, then their account will be automatically migrated to HBO Max at the start of the service in Bulgaria.

The HBO Max service is currently available in 46 territories in the United States and Europe and will increase to 61 on March 8, when HBO Max will launch in 15 more European countries. Gradually, HBO Max is becoming global, and later this year it will be available in six completely new markets, including Greece and Turkey.

Immerse yourself in the world of HBO Max: https://www.youtube.com/watch?v=6agrh8pR5fg&feature=youtu.be