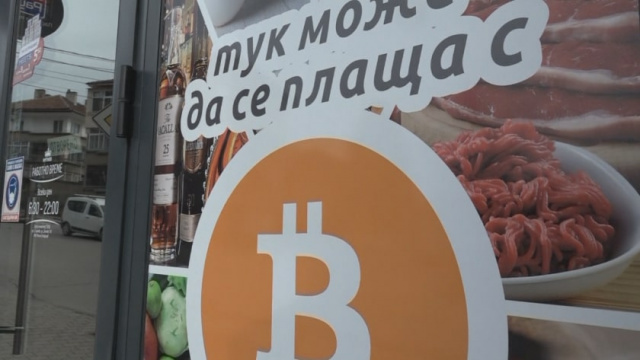 Cryptocurrencies have become increasingly popular around the world in recent years, and in Bulgaria, it turns out, there is already a store where you can shop for basic necessities and pay with bitcoins.

The service is offered in a neighborhood grocery store in Veliko Tarnovo, where a few days ago this method of payment was introduced. The news of this has already spread everywhere, and the owners are expecting the first customers who will be willing to pay with bitcoins.

The grocery store is a place where, in addition to buying basic necessities, one visits to learn the important news from the neighborhood, the city and the world. And the customers of this store are already discussing the cryptocurrency rate.

The owners of this store may be the first in the country to introduce payment with bitcoins, in addition to cash.

“It's my son's idea, he's young and he's familiar with this thing and it's his idea. He wanted us to do something new, innovative in our store. Our customers are mostly older people and what they need bread, milk, the most basic things, but otherwise, they are interested, they ask, they call us on the phone”, says Rositsa Stefanova

Some of the regular customers of this store say that after realizing that they can pay their bills with bitcoin here, they started exploring the possibilities of using cryptocurrencies.

“It's a convenience for people who can afford it and it's the currency of the future. That's my opinion. I regularly listen to what's new on TV and maybe in the future I'll use that currency,” said Margarita, a client at the store.

Shopping with bitcoins is easy, say store employees who have completed a quick training course.

“The customer must have an application installed on the phone, we enter the amount, for example, BGN 10.60, respectively, it scans this barcode and payment is instantaneous but online, so to speak,” said Veselina Nedeva, sales consultant.

“It's been a few days, but we hope to have first clients soon,” said Rositsa Stefanova.

The owners, who have introduced the innovative method of payment, say that they are not worried that real money will not enter their cash register but will go to a virtual wallet, and they are adamant that this is the future.