Sarajevo City Hall Shines in the Colors of the Bulgarian Flag 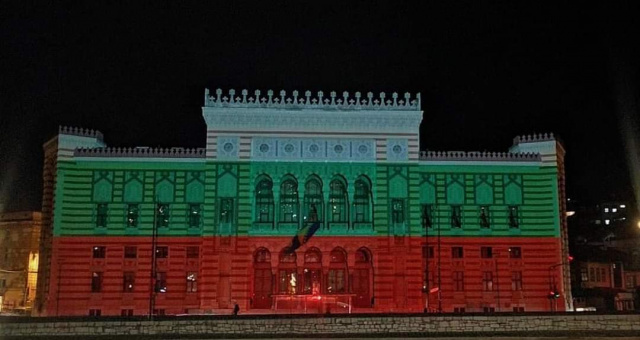 The mayor of Sarajevo said that the lighting of the town hall building is a symbolic act of friendship with Bulgaria.

“Tonight the town hall was lit with the colors of the flag of the Republic of Bulgaria, the first country to recognize the independence of Bosnia and Herzegovina on this day in 1992” (it is not known where the discrepancy in the calendar comes from).

“With this symbolic act of friendship, we want to express our gratitude for the helping hand in the difficult moments of our history,” Mayor Benjamina Karic wrote on her Twitter account.

There was also a post on the Bosnian Foreign Ministry's social media profile.

“Sarajevo City Hall, tonight in colors of the Bulgarian flag. We extend our sincerest gratitude to our friends and partners, the first country to recognize the independent Bosnia and Herzegovina in January 1992, for their generous donation of 258,570 vaccines. Благодаря ви!” (Thank you!)