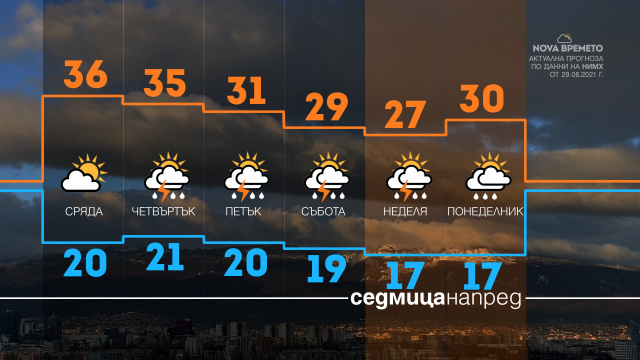 The weather in our country in the next 48 hours will be determined by an anticyclone with predominant sunny, hot and dry weather. Today in the early hours in the lower regions of the east there are conditions for fog, which will quickly dissipate. In the afternoon in isolated places in the Northeast and in the Rila-Rhodope region it will thunder and rain in insignificant quantities. Temperatures in the warmest part of the day will be between 32 and 37 degrees.

In the mountains, temperatures also go up. In the afternoon on the high parts the thermometers will show about 19-20 degrees, in the lower regions - up to 25 degrees. Slight precipitation is expected in the later hours in the massifs of the Southwest.

Around the coast - sunny, hot and stuffy day with daily temperatures between 26 and 29 degrees. In places on the northern shores around noon and in the early afternoon it is possible to rain for a short time. The sea water has a temperature of about 24-25 degrees. The excitement until the end of the working week will be insignificant.

Wednesday is the hottest day this week with temperatures ranging from 35 to 40 degrees in the warmest part of the day. From Thursday afternoon to Sunday - a slight cooling with the passage of a cold atmospheric front. A new period is coming with summer storms with short-term intense precipitation, sharp gusts of wind, violent thunderstorm activity and a risk of hail.

The hot weather comes with another dose of dust from North Africa. Increased concentration is expected on Wednesday and Thursday, mainly in the western half of the country. Visibility will be slightly reduced, sunsets will be reddish-orange, and rain on Thursday and Friday may be muddy. The cloud of dust will dissipate with the passage of the cold front and the westerly wind at the end of the week./Nova News