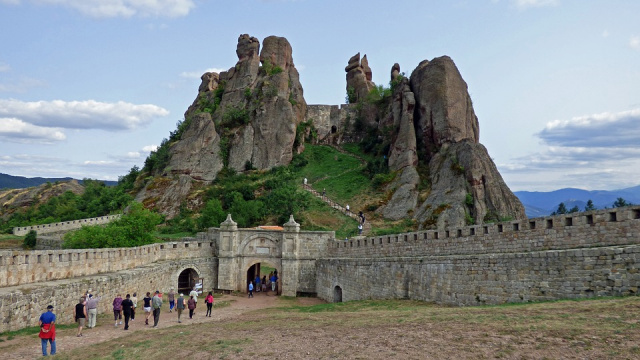 From the capital Sofia, through the vast nature of the Rila Mountains with a breathtakingly beautiful church, to the UNESCO World Heritage Sites in Bulgaria - this Balkan country offers you an incredible variety. You can find everything from food to casinos and nature to city life.

The beginning of my top 12 of the most beautiful sights in Bulgaria is Sofia, the city with the melodic name. Stroll along Vitosha Boulevard and take a look at the many small alleys in the old town. It's best to just run after your nose. No matter where you land, it will be worth it! Sofia's streets are full of charm, and you always discover something new - maybe your new favourite café is waiting around the next street corner?

On your walk-through of Sofia, you should make a detour to the most famous churches in Sofia. The Alexander Nevsky Cathedral is the largest church in Bulgaria and deserves its place in the impressive sights of Bulgaria. The church was completed in 1912 and is intended to commemorate the soldiers who died fighting against Ottoman oppression. The Sophienkirche, on the other hand, is the namesake of the city and the second oldest church in Sofia. This historical place even existed when Sofia was still under Roman rule and was known under the name Serdica. Less known, but just as worth seeing, is the Boyana Church in Sofia, which thanks to its unique frescoes has been a UNESCO World Heritage Site since 1979.

2. The Thracian tombs in Sboryanovo

Thracian ... That doesn't mean anything to you? No problem, I'll explain it to you: The Thracians were a very large ethnic group that lived in ancient times at the time of the ancient Greeks and colonized the entire Balkans. Even among the ancient Greeks, the Thracians were considered ancient people that existed long before them. All the more valuable, therefore, are the almost 40 graves that were only found in 1982 by archaeologists in the northeast of Bulgaria and that together with another 100 uncovered submerged settlements and sanctuaries form the historical-archaeological reserve Sboryanovo.

Incidentally, a gold treasure was found in the up to 5-meter-high burial chambers - it is hard to believe that all of this could remain undiscovered for so long! The tomb of Sveshtari is one of the most significant because it is the completely intact and incredibly impressive tomb of a Thracian king and was rightly designated a UNESCO World Heritage Site. The Thracian tombs are rightly one of the top Bulgaria sights, don't you think? In the burial chambers, besides the king, there are also his wife and numerous offerings, including some horses. You can always visit this mystical place from Wednesday to Sunday.

When sightseeing in Bulgaria you will not get around one thing: monasteries. The wonderful buildings are spread all over the country, but what is probably the most beautiful monastery can be found in a valley on the western side of the Rila Mountains. In the Middle Ages, the Rila Monastery was a center for intellectuals, artists, and writers. From the outside, it looks like a fortress. And the impression is not deceptive, because, at the time of the oppression by the Ottoman Empire, the Rila Monastery was considered a haven.

In the middle of the 15th century, the holy place was looted and set on fire. But since the monastery was rebuilt, it shines even more than before. The monastery church in the inner courtyard is particularly worth seeing for tourists today: inside and outside you will find numerous elaborate frescoes that I have never seen in any other monastery. It is therefore not surprising that the Rila Monastery has been declared a UNESCO World Heritage Site and should be part of every sightseeing program on vacation in Bulgaria.

If you are already at the Rila Monastery, then you have probably noticed the wonderful nature that surrounds the monastery and can justifiably be counted among the highlights in Bulgaria. The Rila Mountains with the highest mountain on the Balkan island at 2,925 meters, the Musala, offer you incredibly beautiful hiking trails and untouched nature. My tip: a hike to the Seven Rila Lakes. On your way there you will pass small sleepy villages. Here you still milk your cows by hand and nobody cares when the neighbors' chickens stroll through your garden. Time seems to have stood still in these beautiful places. By the way, you can stay very well in the village of Borovets, the oldest holiday resort in Bulgaria's mountains.

Another mountain range, which houses the national park of the same name, will certainly teach you astonishment: The Pirin Mountains, which are located in the Pirin National Park. While you can unwind here in spring and summer with walks or horse rides, the place Bansko turns into a paradise for winter sports enthusiasts in the cold months. From mid-December to mid-April you can hit the slopes here or build your snowman. Would you have thought that?

5. The city of Plovdiv

Everyone has heard of the Bulgarian cities of Sofia and Nessebar. But do you also know the city of Plovdiv - also spelled Plovdiv - which is the second largest in Bulgaria? The charming city, which is located in the center of the country, is one of the European Capitals of Culture 2019 and therefore offers you numerous highlights that should not be missing from the list of Bulgaria sights. In addition to numerous sights such as the theater and the Roman stadium, which were built in ancient times, the historic old town of Plovdiv is particularly attractive with its narrow streets and typical houses with richly decorated facades. Other highlights are the numerous sacred buildings, including Orthodox churches, a synagogue, and the Byzantine mosques, whose minarets tower over the city. Yes, Plovdiv is a sight in Bulgaria that you shouldn't miss!