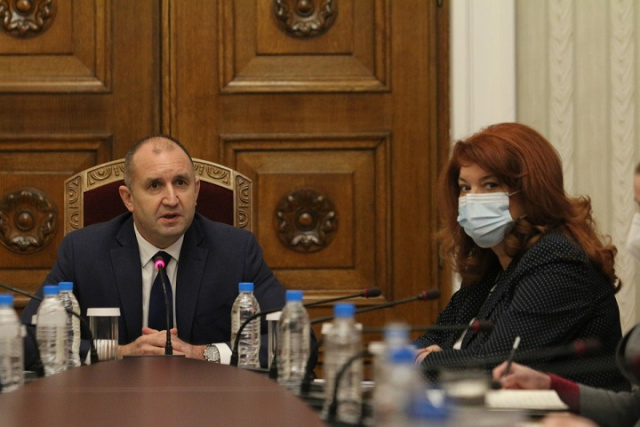 During a working meeting Wednesday with the ambassadors in Bulgaria of EU member states, Switzerland, and the United States, President Rumen Radev said, quoted by his  press secretariat, that one of the priorities of the caretaker government is increasing the transparency in the work of the institutions and winning back public trust in them. Radev also said that the caretaker cabinet has proved that ministers with different political backgrounds can unite around clear principles, priorities and values.

The meeting was also attended by Vice President Iliyana Iotova and officials of the European Commission Representation in
Sofia.

The diplomats asked questions about the political situation in Bulgaria, the fight against corruption, the upcoming hosting by
Bulgaria of the Three Seas Initiative, and the European integration of the Republic of North Macedonia.

The sanctions imposed on Bulgarian individuals and companies under the Global Magnitsky Act of the United States were
discussed as well.

Radev said that the next Bulgarian Parliament is expected to draw up a legal framework with procedures and approaches for
response by the institutions to similar cases in the future. The Head of State said that the caretaker government has already
made the first steps in a bid to avert blocking of public resources and to protect the country's banking sector. Radev urged for similar measures at European level as well, so as to avert blocking of EU funding earmarked for individual member states.

The President described as a step in the right direction a recent decision of the Committee on Civil Liberties, Justice and
Home Affairs of the European Parliament to send a mission to Bulgaria, following the announcement of the Global Magnitsky Act
sanctions on Bulgarians.

Dwelling on the Three Seas Initiative, Radev noted the importance of it becoming a stronger platform for active economic and investment cooperation not only for the countries in Eastern Europe but also for achieving genuine social and economic cohesion in the EU.

Bulgaria supports the European perspective of the Republic of North Macedonia and establishing the country as a strong ally in
NATO, Radev said. The President assessed highly the positive signals in the relations between Bulgaria and North Macedonia
over the past weeks, as well as the restoration of dialogue at the highest level. Radev voiced a hope that this dialogue will
lead to concrete sustainable and irreversible results in the relations between the two neighbouring countries, which in turn
will speed up the European perspective of North Macedonia. BTA