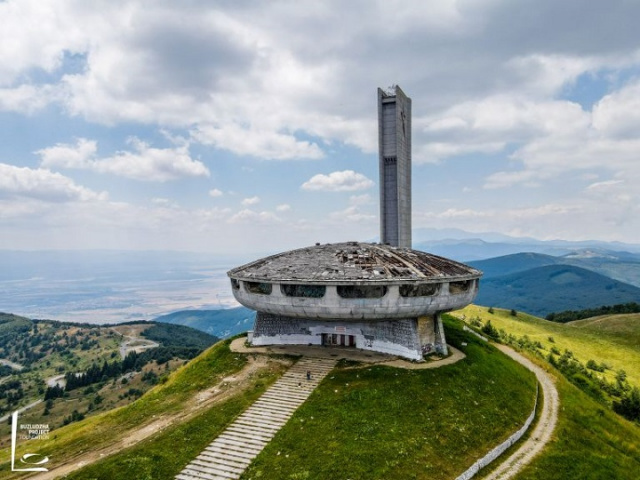 A building full of contrasts. With traces of Socialism and the Transition. A monument that from a sacred place becomes rejected and contradictory. A place with the potential to provoke people to ask questions and where there will be a new life.

This describes the monument of Buzludzha and the ideas of architect Dora Ivanova, creator of Project Buzludzha Foundation and engine of the initiative aimed to preserve the monument built 40 years ago in Stara Planina.

We met with her to find out how she sees the future of the monument and the area around it which, in her words, attract thousands of Bulgarians and foreigners throughout the year, regardless of the weather and despite the lack of anything - markings, toilet, access to the building.

"And everyone who gets there wants to see the building inside," says architect Ivanova, citing research done by her team.

She insists on the definition of "conservation", not "restoration", because in her opinion the monument should be preserved as it is at the moment, with all the symbols left on it, and the future generations to decide whether it is right to restore it it looked in 1981 and make the building functional. About 2,500 square meters of thick copper plates werestolen in a short period, in a quite organized way. By people who within a day managed to make as much money as a few salaries. And this is the main reason for the dire state of the monument today, according to Ivanova. It is inexplicable to her how much work has been put into the destruction of the monument.

The interest of architect Dora Ivanova to the monument on the historical Buzludzha Peak is documented in her thesis, with which she completed her higher education in architecture in Berlin, Germany. It described in detail the project "Buzludzha– the memory of time", and after graduation the young architect began to organize discussions with different participants to understand how it was possible to leave the monument to crumble.

He founded the Buzludzha Project Foundation. She then began to seek help abroad and nominated the building as one of the seven most endangered cultural sites in Europe, under the initiative of the organization Europa Nostra.

In 2019, the foundation, together with Icomos Germany - an international professional organization for the preservation of cultural monuments, applied for funding from the American Getty Foundation and was awarded $60,000.

"The building has world significance, it is not just a cultural monument of local or national importance. It is up to the Bulgarian state to decide whether this will be realized because there is a procedure," says architactIvanova.

"When it becomes a functioning building, the Buzludzha Monument must offer different experiences and attract people, as well as create new opportunities for the development of the entire region", Dora Ivanova concludes.