After 12 Straight Years of Netanyahu Rule Israel Has New Government 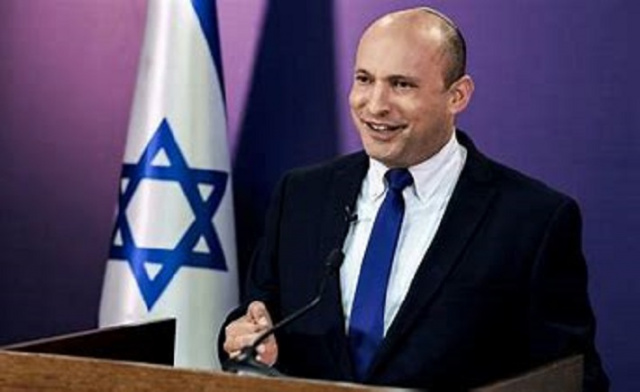 A coalition of ideologically divergent parties ousted on Sunday the hawk Benjamin Netanyahu, Israel's longest-serving prime minister, and formed a new government in a seismic shift in the country's turbulent politics. After holding its fourth general elections in a little over two years this March, Israel is set to have a new face at its helm - the leader of the country's religious right, a politician whose dream is to annex most of the Palestinian West Bank.

The leader of the Yamina party, Naftali Bennett, 49, who made his fortune in the high-tech industry, has agreed to enter in a coalition with his political opponents in order to oust outgoing premier Benjamin Netanyahu, whose 12-year stint in office has made him unpalatable to a large portion of the Israeli public. A former head of an influential umbrella organisation in support of Israel's settlements, Bennett is justifying his risky move with a desire to spare the country the political catastrophe that would be a fifth consecutive election. His participation in what is being described as a “government of change”, formed by Yair Lapid, 57, a centrist and leader of the Israeli opposition (Yesh Atid), in early June and involving eight parties from across the political spectrum, will be a real test for the new prime minister, as the coalition relies on a fragile majority of 61 seats in the 120-seat Israeli parliament - the Knesset. A rotational agreement envisages Bennett taking the prime-ministerial position initially, then passing the baton to Lapid in two years.

The hard-right politician, whose inflammatory comments often make media headlines, will have to fend off doubts over his ability to unify a country that's blighted by political fragmentation and division.

“To Israeli citizens I say: This is a sensitive moment, of political change. I call on all, to demonstrate maturity and restraint,” Bennett said as he was sworn in.

With his back against the wall, Benjamin Netanyahu, 71, attempted to discredit Bennett and two other right-wing politicians negotiating with Lapid by accusing them of being unprincipled and putting Israeli security in danger. He attacked Bennett for breaking his campaign promises not to team up with left-wing, centrist or Arab parties. Netanyahu describes the newly formed coalition about to topple him as “the biggest election fraud in history”.

To those who know Bennett well, he has carefully calibrated his persona to maximise his chances of becoming Israel's most powerful man, or more precisely, the heir to Netanyahu.

Bennett, who stormed onto the Israeli political scene in 2013 by resurrecting a party supporting Israel's settlements, has served as minister of defence, of education or of economy in various Netanyahu governments. He even named his eldest son after Netanyahu's brother, Yoni, who was killed in an Israeli raid in Uganda in 1976. Nevertheless, it is said that the far-right millionaire has had a rocky relationship with Netanyahu. Between 2006 and 2008 he worked as a senior aide to the then-opposition leader before leaving on reported bad terms.

Born in the Israeli city of Haifa to immigrants from San Francisco, Bennett is a modern-Orthodox religious Jew. Unlike some of his former allies on the religious right, Bennett is comparatively liberal on issues such as gay rights and the relationship between religion and state in a country where Orthodox rabbis wield strong influence. He lives with his wife, Gilat, and their four children in the affluent Tel Aviv suburb of Raanana.

Growing up, Bennett attended a religious high school and became a youth leader with the largest religious Zionist youth movement, Bnei Akiva. He served as a commando of the Israeli special forces. Similar to Netanyahu, the new premier of Israel speaks fluent English with an American accent, as he spent some of his childhood in North America with his family. After getting discharged from active military service, he earned a law degree from the Hebrew University in Jerusalem. In 1999, he became a co-founder and co-owner of the US company Cyota specialising in prevention of various types of online fraud. The company was sold in 2005 for $145m, which likely makes Bennett the richest politician in Israel. He is a former CEO of the Israeli company Soluto, a cloud service solution sold in 2013 for $100-130m.

A former leader of Yesha, the largest pro-settlement movement in the West Bank, Bennett has said that creation of a Palestinian state would be suicide for Israel, citing security reasons. Last year, as Netanyahu's government sought to press ahead with West Bank annexation and settlement building in the final months of the Trump administration, Bennett, then defence chief, said: “The building momentum in the country must not be stopped, even for a second.”

Bennett represents a third generation of Israeli leaders, after the founders of the state and Netanyahu's generation, which came of age during the country's tense early years marked by repeated wars with Arab states.

“He's Israel 3.0,” Anshel Pfeffer, a columnist for Israel's left-leaning Haaretz newspaper, wrote in a recent profile of Bennett. “A Jewish nationalist but not really dogmatic. A bit religious, but certainly not devout. A military man who prefers the comforts of civilian urban life and a high-tech entrepreneur who isn't looking to make any more millions. A supporter of the Greater Land of Israel but not a settler. And he may well not be a lifelong politician either.”