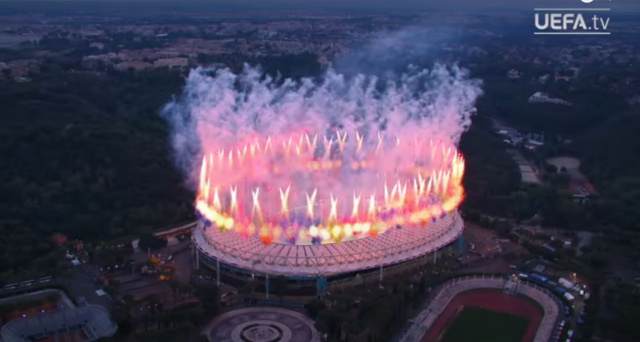 The highlight was a stirring rendition of Nessun Dorma, one of football's most famous songs, by Italian opera tenor Andrea Bocelli.

But the song which was also theme music for the 1990 World Cup in Italy came amid a magnificent fireworks display to light up the night sky, and incredible noise made by the 16,000 fans who had been permitted inside the Stadio Olimpico.

There was also a performance of the official UEFA song We Are The People by the likes of U2 stars Bono and The Edge and DJ Martin Garrix appearing via a video link.

The opening ceremony began with Italy 2006 World Cup winners Francesco Totti and Alessandro Nesta - who are distinguished figures from Roma and Lazio, who play their club football at the stadium - holding aloft a ball in the middle of the pitch.

The Italy duo - who won the 2006 World Cup - however did not ultimately deliver the ball which Roberto Mancini's side used to kick proceedings off against the Turks in Rome, with a remote-control car used to take it to the centre circle.

Bocelli sang as fireworks went off in the background of his performance and a female dancer attached to large helium balloons was floating above.

The Stadio Olimpico was almost at the maximum capacity of 16,000 - around 25 per cent full - allowed in Italy for the opening match between the home side and Senol Gunes' men.

Fans were mixed throughout the stadium, but most of the Turkey fans were in the northern end of the stadium, while Italy fans were sat mainly at the opposite side of the ground.

However, the reduction in attendances is due to the restrictions related to the coronavirus pandemic across Europe, with most of the matches at the tournament - being played in 11 cities -  set to follow a similar pattern.