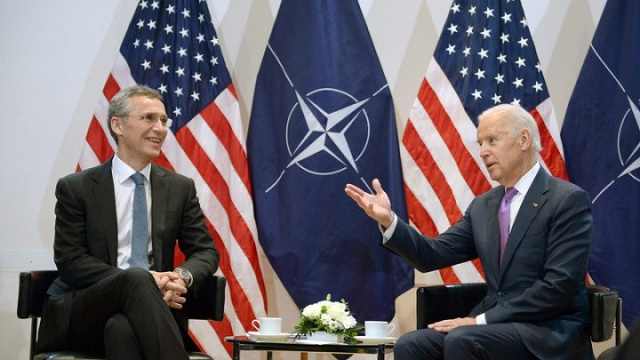 After an identity crisis over the past years, NATO leaders will gather in Brussels on Monday (14 June), for a summit to re-orient the alliance, sandwiched between the G7 summit in Britain and an EU–US summit right after.

After four acrimonious years under the Trump administration, Biden’s arrival will not make the challenges go away.

Since taking office, US President Joe Biden had made efforts to reassure European allies about the US’ commitment to multilateralism, by hailing NATO as ‘cornerstone of transatlantic security’ and reversing Trump’s withdrawal from Germany. But has the transatlantic rift, caused under former US President Donald Trump vanished?

“President Biden is coming to Europe with some strong messages on revitalising America’s alliances, starting with NATO – he will make clear that the strong US commitment to NATO and also our commitment to Article 5, the mutual defence clause,” Douglas Jones, Chargé d’Affaires of the US Mission to NATO, told EURACTIV ahead of the meeting.

Article 5 is the Holy Grail of the alliance. It stipulates that collective defence means that an attack against one ally is considered as an attack against all allies. However, there have been doubts in the past whether in case of a Russian attack over a vulnerable member such as Lithuania or Estonia, France, Italy or Spain would indeed come to aid.

Also, as the relations between the West and Russia continue to deteriorate, there are concerns that Russia and China will team up even further.

Growing political and military cooperation between Russia and China poses “new dangers” for NATO and threatens multilateralism, NATO Secretary-General Jens Stoltenberg said last week, which is why the alliance, “must adapt to an increasingly competitive global security environment”.

At the same time, plans for a ‘strategically autonomous’ European defence plans, focusing on military projects and R&D funding, have moved forward in recent years, after Trump and Britain’s departure from the bloc.

“It’s important that we remember that any attempt to divide Europe from North America would be very dangerous, it also would weaken NATO, and importantly, it would divide Europe, because that’s not what most of the Allies want,” Jones stressed when asked whether Washington expects Europe to back down on its ‘strategic autonomy’.

“But where European security efforts can enhance our collective security, we will support them, we just need to ensure that they do not duplicate and detract from NATO, and that we don’t undermine transatlantic unity in any way,” he added.

Most recently, the EU agreed to allow the US, Norway and Canada to join the bloc’s military project on military mobility, seen as the ‘silver bullet’ for EU-NATO defence cooperation.

A more global role for NATO and America’s shift to Asia will be another crucial debate. The first overseas trips of US Secretary of State, Anthony Blinken and US Defence Secretary Lloyd Austin were to the Indo-Pacific region.

Although there is common agreement that there is a need to address China’s rise, NATO officials have pointed out that the question of how much and where a regional military alliance should try to counter Beijing, remain still unanswered, also as Europeans only slowly see China as the rival that Washington does.

Reorientation for the future

The main point of the summit, however, is the idea to reorient the alliance in more fundamental ways.

In general, there’s the idea of updating NATO’s official master strategy document, its “Strategic Concept”, which was last updated more than a decade ago and which is meant to consider growing Chinese military capabilities and Russian strategic competition and a more political role for the alliance.

NATO’s recent reform report, compiled by a panel of experts and presented in December, has drawn up recommendations on how the military alliance should tackle new challenges in its backyard. The proposals range from curbing single-country blockages, ‘Coalitions of the Willing’ and more mediation powers for the Secretary-General.

Among other things, it also includes the proposal to fund deterrence and defence measures at least partly from a community budget, which could prove contentious as according to NATO diplomats, a number of allies have made it clear they are not prepared to support such far-reaching proposals.

Leaders are expected to deliberate and green light a final communiqué on the proposals.

“Militarily strong, politically united and responding to changes in the global environment – that is the image that the alliance will want to convey, but characteristically, reality does not bend easily to the will of the NATO leaders,” said Thomas Kleine-Brockhoff, vice president at the German Marshall Fund.

“To achieve the political unity that they all crave after years of divisions, NATO will improve the consultative processes to try to better align threat perceptions and goal definitions,” he added.

“The challenge for NATO will be to convert from being a regional military alliance, to becoming more like a global security network,” added Bruno Lete, senior fellow of security and defence at The German Marshall Fund.

“NATO still needs the big-visibility tanks, frigates and jet fighters, but the coming decade will put much more emphasis on intelligence-driven, AI-assisted, networked interventions,” he added, which according to him, in the best possible scenario, could take at least half a decade.

Elephants in the room

On the sidelines of the summit, Biden is scheduled to meet Turkey’s president Recep Tayyip Erdoğan for a bilateral meeting.

With the acquisition of the Russian S-400 missile system, Turkey’s disruptive behaviour in the Eastern Mediterranean and Ankara’s unaligned posture after the hijacking of a Ryanair flight from Athens to Vilnius by Belarusian authorities, NATO partners’ trust in Erdoğan has been critically damaged over the past.

The US-Turkey relations are indeed complex and worth a spy novel. To undermine the Turkey-Russia rapprochement, Washington props up the conflicts by proxy between Ankara and Moscow in tension hotbeds like Libya and Syria.

“We as the United States we have many things we don’t agree with Turkey on, we don’t make any secret of that,” Jones said.

Asked what there is to expect from the Biden-Erdoğan meeting, Jones said he expects “all the issues, including the tough ones to be addressed”.

On his eight-day trip to Europe, after the summits with European allies, Biden is scheduled to meet Russian President Vladimir Putin in Geneva on 16 June.

US officials before the summits have stressed that it’s no coincidence that the summit follows right after the consultations with European allies.

“That’s not by accident,” Jones said, adding despite all challenges “for NATO, Russia remains the most immediate threat”.

Speaking to EURACTIV, European diplomats said they appreciated the prospect of coordinating on the subject of Russia, after the Navalny poisoning and the recent Belarus skyjacking case.

However, the White House’s decision to waive sanctions against the Nord Stream 2 pipeline from Russia, has caused the mood to sour, especially in Eastern Europe. EURACTIV