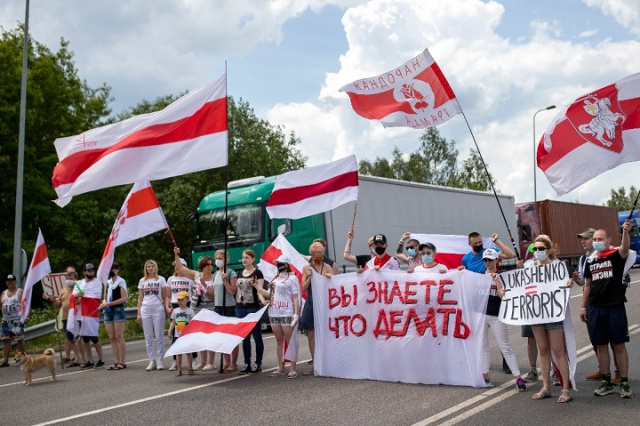 A top American diplomat told Congress on Wednesday that the Biden administration plans to impose additional sanctions on the authoritarian regime in Belarus — a significant step as lawmakers agitate for tougher punishments against a top ally of Vladimir Putin.

The U.S. effort comes amid rising tensions between Minsk and the West over Belarusian leader Alexander Lukashenko’s brutal crackdown on pro-democracy activists and a free press, part of his scramble to cling to power despite having lost last year’s presidential election. Just last month, the Lukashenko regime sparked international criticism after forcing a commercial airliner to land in Belarus' capital city to arrest a key opposition figure and journalist who was on board.

President Joe Biden's administration is readying a harsh response to Lukashenko. Julie Fisher, the U.S. ambassador-designate to Belarus, told members of the Senate Foreign Relations Committee on Wednesday that the White House is “working hard on a new executive order” that will “raise the costs of the violence and the repression that the regime is inflicting.”

Currently, Biden is relying on an executive order from 2006 to sanction Belarus in the wake of its provocative grounding of the Ryanair jet. But lawmakers in both parties want the president to sign a new, up-to-date executive order and consider imposing human-rights sanctions on Belarus using existing authorities from Congress, moves that would avert the need for a new sanctions bill.

“The more we wait, the more impunity takes place,” warned Sen. Bob Menendez (D-N.J.), the chair of the Foreign Relations panel. “It is time to increase the pressure.”

The Biden administration has already reimposed sanctions on several Belarusian entities and urged Americans not to travel to Belarus. It also recently directed U.S. airlines to “exercise extreme caution” when flying in the country’s airspace. But Menendez said those actions “did little to change Lukashenko's calculus.” For example, Putin hosted Lukashenko on the Russian president’s yacht last week, a sign that the Belarusian leader is continuing to embrace Moscow’s influence.