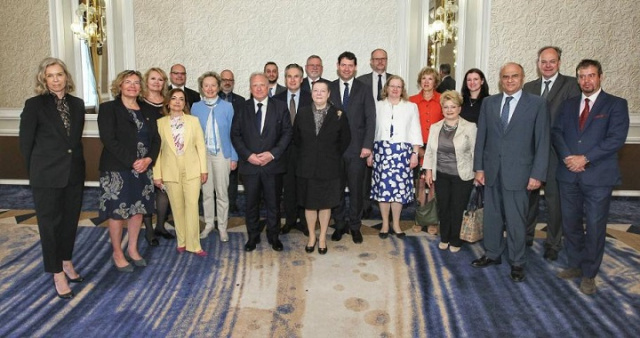 Caretaker Foreign Minister Svetlan Stoev discussed on Monday with the ambassadors of EU Member States to Bulgaria priority matters on the Union's agenda, including the post-Covid recovery and the implementation of the Recovery and Resilience Facility, environment and climate issues, migration, and EU enlargement, the Foreign Ministry said in a press release. The meeting was organised by the Portuguese Ambassador to Bulgaria as a concluding event within the Portuguese EU Council Presidency, which ends in late June.

Bulgaria has always supported the European perspective of the Western Balkan countries and, being a country in this region, it realises clearly that the path to the EU is the strongest factor for the transition to democratic governance, Stoev said during the meeting. When it comes to the European integration of the Republic of North Macedonia, Bulgaria's position is clear, consistent and predictable, and it has not changed, he noted.

The caretaker government is following the framework position and declaration adopted by the 44th National Assembly in October 2019. “Our position also has the support of 85% of Bulgarian citizens,” Stoev added.

Bulgaria has always showed a will for constructive and pragmatic dialogue with Skopje, the Foreign Minister went on to say.

Sofia will continue working on restoring trust and expects legal guarantees for the observation of the 2017 Treaty of Friendship, Goodneighbourliness and Cooperation and constructive dialogue with the Republic of North Macedonia to find a long-term solution to the bilateral issue, Stoev explained.

The Foreign Minister welcomed the introduction of the EU's Digital Green Certificate and told the ambassadors that the Bulgarian authorities are already issuing certificates that meet the EU requirements.

Talking about the National Recovery and Resilience Plan, Stoev stressed that the caretaker government gives a high mark to the Recovery and Resilience Facility and is working actively on adapting the national plan, the focus being on future-oriented projects, including such that will aid green transition and digital transformation.

Minister Stoev thanked the Portuguese Presidency for the skillful and effective directions amid the Covid-19 pandemic that made it possible to distribute 10 million accelerated vaccine doses in the spirit of solidarity.