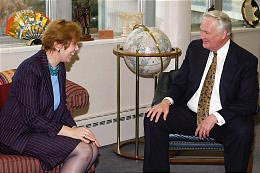 Many thaks, full text of the article follows:

PROVO - Within hours of the terrorist attacks on Sept. 11, 2001, a splintered parliament in Eastern Europe passed two unanimous resolutions.

The first, to join the anti-terrorist coalition being formed by the United States, was simple and unsurprising. The second, to seek an invitation to join the North Atlantic Treaty Organization, signaled a new era in Bulgaria, where the socialist party had stringently opposed NATO membership.

Bulgaria's ambassador to the United States visited Wednesday with LDS Church President Gordon B. Hinckley and spoke at BYU as she prepares to help guide her nation, which borders Turkey, through NATO membership ratification hearings in the U.S. Senate as winds of war drift northwest from Iraq.

"Since Sept. 11, Bulgaria has since behaved as a de facto member of the anti-terrorist organization and as a member of NATO," Elena Borislava Poptodorova said during a lecture at BYU's David M. Kennedy Center for International Relations. Poptodorova is one of few female ambassadors in the world.

Bulgaria's parliament issued another unanimous vote Friday, this time to grant a U.S. request for military assistance against Iraq, if needed. Bulgaria approved use of its military base on the Black Sea, cleared American planes to use its airspace and dispatched 150 troops trained in antibiological and antichemical warfare.

Those actions should help Poptodorova make her case with U.S. senators that they should ratify Bulgaria's application for membership in NATO, which extended an invitation to Bulgaria in November. Six other emerging democratic nations also must be approved by the senate or parliament in each of the organization's member countries.

"The tacit rule is that the decision in Washington will be the decisive one," Poptodorova said, "and maybe the most difficult one."

Along with membership in the European Union, which could happen in 2007, joining NATO is a major priority for Bulgaria. It would provide national security as well as stamp the country as safe for increased international trade.

"NATO membership will directly impact the lifestyle of Bulgarians," Poptodorova said. "NATO membership would be a certificate for Bulgaria, to show the world we are part of the democratic family."

Poptodorova's position is interesting. Female ambassadors are rare. BYU spokeswoman Carri P. Jenkins said the university has had 90 ambassadors speak on campus since 1996 and Poptodorova is the third woman.

Her background as a career diplomat and her work on foreign policy and national security issues during 11 years as a member of parliament positioned her for the job, she said. The pro-NATO position she took in the early 1990s also helped.

"The views one holds are important when an assignment in Washington needs to be made," she said. "Washington is the most important diplomatic appointment for Bulgaria, given its priorities."

Poptodorova said selecting a female for the Washington post was shrewd.

"As a woman, you're noticed and remembered, especially if you don't stay quiet," she said. "For a small country, this is important."

Bulgaria ended 45 years of communist rule in 1990. The transition to a market economy was made more difficult by a succession of wars in the former Yugoslavia, on Bulgaria's western border.

"For 10 years, we were blocked from Europe," Poptodorova said. "That translated into material damage. Some say it led to direct damage and loss of $6 billion."

There is an economic element to Bulgaria's policy toward Iraq, which owes Bulgaria more than $1.7 billion. However, that isn't the country's main concern, Poptodorova said.

"As a member of the U.N. security council, Bulgaria has worked hard for a solution to the crisis," she added. "Unfortunately, and especially in light of Secretary Colin Powell's speech last week at the United Nations, it is more and more obvious that Iraq is engaged in utter non-compliance and a total lack of cooperation."