Piritta Sorsa: Bulgaria Has to Speed Up Structural Reforms 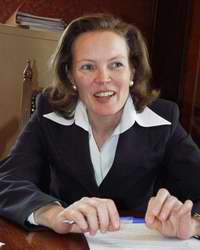 Ms. Sorsa, a Finnish national, is currently the International Monetary Fund's (IMF) resident representative in Bulgaria and has worked at the IMF since 1994. Her previous assignments include i.a. mission chief for Honduras in charge of negotiating IMF operations there, and country related work on trade and external sector issues in Algeria, Bulgaria, Chile, and Korea as deputy division chief in the trade policy division. She also worked at the World Bank between 1985 and 1994 including on structural adjustment operations in Africa, the Baltics and Thailand. She has a Ph.D in international economics from the Graduate Institute of Internaitonal Studies in Geneva, Switzerland, and she has published a number of articles on international economic issues. She speaks English, Finnish, French, Spanish, German and Swedish.

Q: What are you projections for the Bulgarian economic performance in 2003?

A: Our projections for 2003 were made assuming that there will not be any major external shocks like the war in Iraq and that implementation of structural reforms is accelerated and good policies continue. On that basis, five percent can be achieved this year for growth. For inflation, we have three percent average, 4.1 percent end of period. The current account deficit is projected to be around five percent. Those are sort of the key projections for this year. Naturally, external shocks will pose downside risks for these targets.

Q: What are your projections about unemployment?

A: We do not project unemployment. It is currently about 16-17 percent and has started to decline. This has been helped by the employment programs but I also think that the private sector has started to create more jobs. Hopefully this declining trend will continue.

Q: What would be the impact of a possible war in Iraq on the world economy and the Bulgarian one in particular if it lasts longer?

A: The impact depends on how long the conflict will be - short or long and how many months...We do not have any particular projections on its potential economic effects yet. But, conflicts create uncertainty, which may lead to less investments and consumption. This may affect growth in Europe, which in turn would lower Bulgaria's export and growth potential. Also, if the oil price goes up, the current account may deteriorate and inflation may go up.

Q: The Executive Board of IMF completed on Friday the second review of Bulgaria's economic performance under the stand-by credit. Could you outline the challenges that Bulgaria continues to face, according to the Fund?

A: I want to mention first that in general the Board commended Bulgaria for the good performance in the macro economy and the completion of structural reforms such as passing the Bank Bankruptcy Act, increase in energy prices and privatization in the financial sector.

But at the same time they noted that to meet the challenges of transition and EU accession, external risks and higher growth and employment, it is very important to continue with the delayed structural reforms. In particular, they mentioned the need to improve the business environment, and the importance of increasing labor market flexibility for employment creation. They welcomed the active labor market policies but emphasized that more private investment is needed to create permanent jobs. Also, they commended the growth of credit for the private sector but at the same time emphasized the importance of a good supervision.

Implementation of the budget will also be a challenge this year and beyond. Therefore it is important to improve tax collection, reform the municipal finances, hospitals, railways, energy sector which are key both to meeting the budget targets but also to release resources for higher social expenditures and EU-related public investments in the future.

Some concern was also expressed on the use of the funds from the fiscal reserve for various activities (e.g. venture capital fund, participation in state enterprises) that can either loosen the fiscal stance and result in poor allocation of resources. The Board welcomed the commitment of the government to limit these transactions and stop this practice.

Completing privatization is also of great importance. The privatization of Bulgartabac Holding and the Bulgarian Telecommunications Company are not part of the IMF program but they are important for the economy.

Q: In mid-December, Mr. Schiff said in Sofia that the Fund would like to see a different budget. Why did the Fund change its stand regarding Bulgaria's budget 2003? Do you still have concerns regarding the budget deficit this year?

A: I do not think we changed our stance on the budget, but made a compromise. The agreement was not ideal in a sense that the budget was not modified. The final solution included a number of elements. On the revenue side, the projections for social security revenues were lowered. On the VAT, the lowering of VAT registration thresholds was postponed, which can help maintain revenues. Also, there were new revenues from the delay in privatization as dividends from Bulgarian Telecommunications Company and Bulgartabac Holding will now come to the budget, and from foreign debt collection. Also, there were additional savings from interest payments because international interest rates and the dollar continue to decline. In the hospital sector, the government presented a plan to control costs and make reforms. We also agreed on an eighty eighty percent rule, which means that only eighty percent of certain expenditures are spent during the first three quarters of the year. Revenues will also be monitored monthly. Meeting the budget target will be a challenge but the government has had a good track record in this regard.

Q: The Fund and the finance ministry reached in the end of last year a compromise by agreeing on a monthly baseline of total revenues that needs to be achieved to get to the end of the year budget target. What will the Fund do if you see significant deviations from the agreed figures? What could be the Fund's recommendations in this case?

A: On the monitoring of the revenues, we just have to see every month first how the revenues perform, what the cause of potential underperformance might be, and then see what can be done.

Q: Could Bulgaria's agreement with IMF be altered to a precautionary one?

A: Yes, if the government wants it. A shift to precautionary standby agreement normally presupposes that the balance of payments situation of the country and economic prospects are good. Currently, this is the case although there are uncertainties in the world economy like a potential crisis in Iraq, which may affect Bulgaria's balance of payments. I think that is why the government decided not to change the agreement to a precautionary one yet.

Q: Which countries have precautionary agreements with the Fund?

Q: Could you project when the Bulgarian economy will be strong enough to become independent by the International Monetary Fund?

A: The current stand-by agreement expires in early 2004. Then it is up to the government to decide whether they want a new agreement or none at all. If the economy continues to do well, Bulgaria can soon graduate from IMF funding.

Q: Do you approve the decision of the Parliament to exempt key privatization deals from judicial control?

A: In general, we support the government's efforts to conclude the various privatizations. But, I'd rather not comment the details.

Q: How do you assess the work of the economic team of the present government? In what fields it can be improved?

A: The economy is doing well, the growth was quite strong and the fiscal deficit has been kept and inflation is low. Overall, I think that the economic performance shows that the macroeconomic policies have been good overall. More attention has also been paid recently to the social costs of transition in terms of better targeted social policies. Of course, incomes are still low, unemployment remains high and many important reforms have been delayed. This means that more needs to be done to maintain the good performance, create more jobs and higher incomes for Bulgarians. It is important to speed up structural reforms to make the economy more efficient, and to attract more investments.

Q: How much Bulgaria owes to the Fund so far?

Q: What do you think are the main problems that drive foreign investors back from Bulgaria?

A: There has been a lot of foreign investment in Bulgaria over the past years both in the privatization and greenfield areas. There was a slowdown last year, but some of this may reflect the sluggish international economy, which makes investors cautious with new projects. It is also important to improve the business environment, in terms of simplifying regulations, improving legal certainty, stability of policies and infrastructure.

Q: When will a new mission of the Fund come to Bulgaria?

A: The next mission is expected some time in May for the next review.