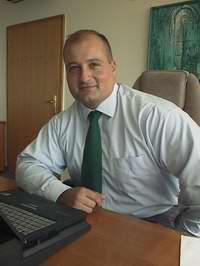 Mr. Kirk Kirkov is the Chief Executive Officer of UMICORE MED and the President of the Bulgarian International Business Association (BIBA). As a Chief Executive Officer, he manages all operations of the subsidiary in South Eastern Europe. Before assuming the position at UMICORE, he was part of the Amylum Group from 1998-2000, as General Manager of the Balkan based (Bulgaria) joint venture Company "Eastarch" (Amylum/Tate & Lyle and Archer Daniel Midland). As a Plant Operations Manager of GNR Technologies, Montreal, Canada, 1996-1997, he managed all aspects of operations and Research & Development for a $5 million plant manufacturing molded rubber products for the highway safety and construction industries.

Mr. Kirkov talked to Milena Hristova, Editor of the News and novinite.com

Q: The White Paper on Business Climate in Bulgaria for 2002 outlined several points of cooperation with the government - accelerating reform in the judiciary system, tightened border control, increased efficiency in the administrative system and decentralization of the budget. How can foreign and Bulgarian business assist the government in successful dealing with these issues?

A: Business in Bulgaria is already assisting the government. The process began with the Council for Economic Growth. The program for next year is currently being prepared, including strategies for improving Bulgaria's economic competitiveness and business climate. All issues included in the White Paper, as well as the issues raised by other business associations, are included in this context.

I would warn against differentiating between Bulgarian and foreign business. Though their experience is different, they are all investors, complementing and supporting each other.

Q: How do you assess the government's response to the raised issues?

A: The White Paper is too comprehensive to expect the government to respond with a report so shortly after its presentation. Still all issues are to be discussed at the Council for Economic Growth. The aim is to reach consensus on the relevant measures to be implemented, a process, which will involve the joint forces of Bulgaria's business and government.

Q: How can the dialogue between national authorities and BIBA members be improved?

A: It is not already a question of the communication itself, but rather of its quality. For the first time in the history of Bulgaria business can now rely on such an open channel for communication with the government. When we say something we are always heard. The point is that the two sides should aim to improve the quality of what is being said. Saying something is not enough. Measures should be proposed and consensus sought in an effort to agree on a mechanism for their implementation.

Q: What should the government do to stimulate investments and revive the industry?

A: The issue is very complex. Generally speaking it is our opinion that efforts must focus on three strategies.

The first one is a strategy for attracting industries in Bulgaria. In this respect Bulgaria is competitive in the region, since it offers good conditions. In this strategy Bulgaria is viewed as a platform for regional development. There are some not traditional for the region industries for which we can attract serious investors and increase the country's base.

The second strategy aims to improve the competitiveness of Bulgaria's present industries, the majority of them dealing with the production of raw materials. In comparison with its global competitors, Bulgaria's major problem is its low productivity. This is a field that leaves much to be desired.

The third element in our global economic strategy is the development of entrepreneurship within small and medium-sized enterprises. Due to a number of reasons this is one of Bulgaria's weakest sides. Entrepreneurship did not develop because of legislative obstacles, but also - and we must admit this -because entrepreneurial spirit is not typical of our Bulgaria's culture.

Q: Foreign investors seem to be shy of Bulgaria. How can you explain this?

A: I wouldn't say foreign investors avoid Bulgaria. It is rather that the state did not manage to find the most favourable formula to attract them. We are talking here about a competition in which Bulgaria rivals with many other countries to get even a limited amount of investments. Statistical data show that in this competition we do not rank first, quite on the contrary. Bulgarian market is very small and it is tough for it to compete with the bigger and more interesting markets. What we can do is improve the marketing and attract potential investors who do not know Bulgaria. I will cite the words of U.S. Ambassador Pardew that Bulgaria can advertise a whole region by granting access to it.

People may ask why would one choose Bulgaria? Regardless of all the criticism we hear every day about Bulgaria we have one of the most stable economies in the region. Bulgaria's macroeconomy is not something we must be ashamed of. Think of Romania, Macedonia, Turkey, even Greece, and you will find that in some aspects, investors have reasons to come to Bulgaria with a relatively humble amount of investments and thus gain access to the whole region.

Q: Which is the crucial factor for Bulgaria's sustainable growth?

A: Macroeconomic stability. I would like to underline the fact we appreciate the advantages we enjoy due to the success of the Currency Board. The Currency Board allowed us to gain respect in the international society and it is something we should use better. Unfortunately good things are rarely appreciated.

Q: What steps will you take to attract more members by the end of 2003?

A: BIBA is not any more an organization of foreign investors, but an organization of all investors who want to stick to international standards in their business activities. BIBA mission is to be a channel for the implementation of the best practices, as they are understood according to international standards. That is the reason why we opened our doors to Bulgarian companies and strive to attract elite Bulgarian companies. In this respect we have achieved great success. We want to be leaders in improving business climate in Bulgaria through the skills of our members.