Emil Kyulev: Bulgarian Businessmen Have the Spirit to Succeed 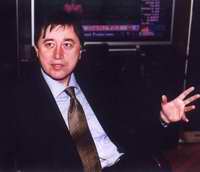 Emil Kyulev is one of Bulgaria's most influential financiers, founder of Touristbank and Roseximbank and member of the Vazrazhdane club - the club of the country's big business. In 2002, he created largest wholly Bulgarian-owned financial group DZI-Rosexim after he acquired an eighty percent stake in the country's largest state insurer. On January 23, Emil Kyulev, was named Bulgaria's Economist of 2002 by the Ikonomika magazine. He won the title in spite of the impressive competition that included Finance Minister Milen Velchev, Executive Director of the Bank Consolidation Company Nelly Kordovska, financial expert Plamen Oresharski and Chair of the National Audit Office Georgi Nikolov.

Q: What will be the role of the financial group DZI-Rosexim for the Bulgarian economy?

A: This will be the role of the ice-breaker, the role of those who dare first into unexplored territory. Here is a Bulgarian investor who injects resources into the Bulgarian economy. We give a message that says indigenous business believes in the Bulgarian state. And there is something else - what we do invest have been generated in Bulgaria. Now we invest it to create an added value that stays in Bulgaria and spurs the economy.

Q: What will be the new financial services that the group will offer on Bulgarian market?

A: There are currently fields where Bulgarian consumers get no financial services at all. So if you adapt a product already well known abroad, it will be actually new to Bulgarian market. The group plans to pay a lot of attention to house crediting and in this field we will introduce new schemes on the local market. In bank sector, we will develop products as international cards, investment crediting, currency crediting, bank guarantees at different stages. As an insurer, we will cover such risks that have never been covered before in Bulgaria. The tourism sector offers many opportunities for insurances that have never been offered before and we will also pay a lot of attention to them. The group will solicit new type of health insurance services that have nothing to do with the state health-insurance system. We now plan the construction of three hospitals as part of the big-scale strategy for the group's development.

Q: Do you plan expansion outside Bulgaria?

A: We are to open a branch in Athens soon - not only a representation office but a really functioning bank branch. Such a branch will be established in Moscow as well. And we currently mull a possible branch in Belgrade. I think Bulgarian companies have a very logical field for expansion - these are the neighboring countries, there is also Bucharest and Istabul. But in my opinion, a very large territory for development of Bulgarian business is to be found in Russia as well.

Q: Do you plan joint investments in Bulgaria together with foreign partners?

A: Yes, we currently hold talks with both U.S and European companies for possible joint projects. The negotiations have already reached a very advanced stage and I hope we will soon have the opportunity to present the projects one by one to the public. In the tourism sector, we already have two quite advanced projects. We also plan expansion in the field of residential construction that goes farther than capital city Sofia - we will gear such projects across the country and even abroad. The next field that we are interested in is energetics. The new large-scale investments in Bulgaria's energetics are being discussed in our financial group and with our partners.

Q: How do Bulgaria's large-scale enterpreneurs assess today's business climate in the country?

A: The fact that we have invested some BGN 100 M in the country shows that the business climate has bettered. Of course, there are a lot of remarks and recommendations that an entrepreneur can make regarding the state administration. However, by and large - today is much better than what was not long ago and I think big investments are to come to the country. You see, Europe suffers recession and a war looms in the East. In this difficult environment, Bulgaria shows a decent pace of economic growth and investment inflow. Look at the miracle that happened in Bulgaria's tourism sector. Take the above-mentioned negative processes and the slump suffered by tourism around the globe and you see Bulgaria register growth in spite of three negative factors. This proves that there are Bulgarian businesses that can succeed and even thrive in a hostile environment. Tourism in Bulgaria is almost entirely private-owned sector. Here is evidence that Bulgarians, if granted freedom, can do well when others fail. We have a spirit that helps us achieve a lot.