James Knight: UK Should Wake up to Bulgaria 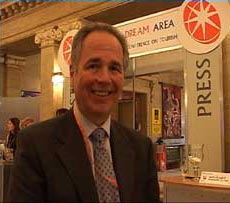 James Knight is Director of Business Development for Senior King Communications Group, one of the UK's top advertising companies. An American, living in the UK since 1984, he has been in travel and tourism for the past 25 years, an expert in international marketing and motivational selling.

Q: Are there any similarities between the Bulgarian and UK tourism market?

A: Compare what UK has to offer to its tourists alongside Bulgaria and you will find tremendous similarities. Many people come to the United Kingdom just for its heritage and history, which are a tremendous asset in the case of Bulgaria. The problem is that people are not aware of what Bulgaria has. Most of them are amazed that Bulgaria has a sea cost and miles of sandy beach. According to the picture people in the United Kingdom have in mind, Bulgaria is closer to Russia and inland. Though it is important not to have only the picture of the sandy beach, it is just as important to point out that you do have a sandy beach.

Bulgaria is a country rich in natural resources - woodland, rivers, mountains, lakes, beautiful countryside, spas, sandy beaches, history, and culture; a warm Mediterranean climate and a welcoming smile, hundreds of mineral spas and organically grown produce. What you should do is identify your assets, focus and realise what you have. It is the strange thing about human nature that we take for granted things we are given - our freedom, health, friendship, eyesight. It is only important to us after we lose it. Bulgarians cannot possibly appreciate the country's assets fully because they have grown up with it all their life. It takes someone from another country to show you and give a reflection of what you have.

Q: Why do you think people in the United Kingdom have no picture of Bulgaria?

A: Up until 1989 there was no emphasis on promoting the country at all. Bulgaria was known as a communist country, associated with many negative images of a gray, solemn country. At the same time the country's name never came up in conversations. Currently Bulgaria is outside the Comfort Zone of the majority of UK travelers. Data on the UK market traveling abroad show that Bulgaria received no more than 0,03% of all GBP 24,3 B in tourism revenue spent by 38,5 million visitors abroad. Among the countries, which are in the UK traveler Comfort Zone, are Spain, France and Greece. The human mind thinks in terms of pictures rather than words. No picture comes to mind to many in the UK when someone says the word Bulgaria. This very fact presents a wonderful opportunity to create a fantastic first impression. First impressions are important because they act as a filter for everything we see and hear afterwards. I suggest that you shoot for the moon, settle for the stars, but not sell-out.

Q: How can Bulgaria be included in the comfort zone of the UK market?

A: We have been working with your Ambassador and staff in London for the past fifteen months in formulating a plan. The answer to capturing the hearts and minds of the UK market begins with teaching people about Bulgaria. We become confident, comfortable and enthusiastic about the things we know the most about. In our survey we found that most were unaware of Bulgaria's close proximity to the UK and the large majority thought of it without a seacoast.

We believe it is time for the people of Great Britain to "Wake up to Bulgaria". In a campaign promoting the awareness of Bulgaria, the country should be introduced to the UK market. The other stages include creation of a positive image as a destination of choice and the use of dynamic laws to affect, influence and control what people think. What we hope to be able to do is provide an infrastructure in the UK, a platform to present Bulgaria to the UK market in words that it will understand. This is important because if we can increase the number of visitors substantially from the UK, it will bring millions of dollars into your economy, benefiting the lives of people within your community.

Bulgaria should give people reasons to visit the country. Take for example Turkey. The one thing they have is time. Back in 1962 they started the initiative to promote the country and they have fifty years of promotion ahead of you. You can learn from them, but don't compare yourselves to them, don't copy them. You have got millions of people going all around you, so it would be easy to get them turn right and go down five miles.

Q: Data of Bulgaria's Economy Ministry show that tourists from Great Britain have increased significantly over the previous years. What do you attribute that to?

A: I attribute it to a simple organic growth and the search for variety, which is one of our greatest wants. A number of people want to come here simply because it is different. Bulgaria has had enough troubles and now you need to have great things happening to you. The first thing is to aim high and attract the best. If people come to Bulgaria just because it is cheap you will hate the people you are attracting, your work for or with them. Imagine people coming to Bulgaria because it is cheap. Back at home they would tell their friends that it is cheap in Bulgaria. Their friends like cheap things and come to Bulgaria as well. Before long you will have a whole herd of people you do not want.

Q: Which areas should Bulgaria promote in its campaign as a tourism destination, besides the seaside?

Q: How do you assess the average quality of Bulgaria's tourism services now?

A: I prefer to look at things that I like, because there is too much of the negative - in the travel business, on the news. What I see here are hundreds of people looking for a way forward, very keen to succeed. That's what I hoped for and that's why I am participating in this.