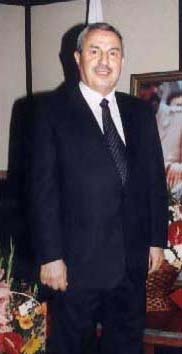 H.E. Farag Gibril has been Libya's ambassador to Bulgaria since 1997. He was born in 1939 and graduated from a military academy in 1962. He then specialized in the United States and joined the Libyan armed forces. After he retired, he was appointed secretary of the People's Bureau of the Great Socialist People's Libyan Jamahiriya in Bulgaria.

Q: Do you think Bulgarian-Libyan relations have changed since the government of the Simeon II National Movement have stepped into office?

A: I think there is a sound base for Bulgarian-Libyan relations from which the interests of both countries and both nations can benefit. Our relations have a long history. There was a certain low-tide period due to a number of factors - the most important of which are the substantial changes in Bulgaria and the international pressure that was exerted on the Great Jamahiriya (the unjust economic blockade in particular). However, both countries realized the importance of bilateral ties and made significant efforts to right their direction.

Q: Do you think the relations between Bulgaria and Libya will be altered by Sofia's NATO and European Union integration?

Q: Many Bulgarians work in Libya. Has the attitude towards them changed since the six Bulgarian medics have been charged with intentionally infecting Libyan children with HIV?

A: As to this question, you might be enlightened by Bulgarians who work in Libya. I am sure their answer will be a negative one. In the Great Jamahiriya, neither the traditions, nor the religion and the law permit people to be held responsible for some other people's deeds. That is why Bulgarians who work in the Great Jamahiriya have normal lives and are treated well as they have been before.

Q: Does Libya still have an interest to employ Bulgarian specialists?

A: It does. The cooperation with Bulgaria still continues as to the employment of Bulgarian technical specialists in different fields: medicine, industry, construction, etc.

Q: In what areas Bulgaria and Libya should boost cooperation?

A: I think there are a lot of areas in which both countries can cooperate. For example, in securing employment of Bulgarian technical staff in Libya, joint investment of companies from both countries in Bulgaria, Libya or Africa, especially in the field of tourism, agriculture and industry.

Q: Libya's debt to Bulgaria amounts to USD 56 M and both countries hold talks about the settlement of the debt. How far have these talks gone?

A: The talks on the issue were salutary. The two countries have reached an accord how to treat this issue. At the moment, preparations are under way for implementation of the commitments.

Q: What are the similarities between the two nations and what are the differences?

A: The similarity between Libya and Bulgaria is that both are small countries that play significant role on a regional and international level. However, Libya's geographical situation in the heart of Africa, its long-stretching Mediterranean coast line, its African identity as well as its Arabic roots inspire certain commitment to its region and its nationality. On the other hand, the situation of the Great Jamahiriya in the Mediterranean facing Europe's Southern coast, assigns to the country a specific role in fostering and developing the relations of its African and Arab medium with united Europe.

Q: How do you assess the latest developments in Iraq?

A: Although Iraq implements all requirements of the international community and directly of the U.S and Great Britain, I think, unfortunately, the U.S. is determinate to kindle a war in this important and sensitive region that over the second half of the last century suffered the terror of many conflicts: the Israeli-Arab Wars, the First Gulf War between Iraq and Iran and the Gulf War II when the allied forces devastated Iraq's infrastructure - a war that resulted in siege, humiliation and famine. To all this we must add the violence, genocide and the exile of Palestinian people. That is why we think the region cannot take more of a war. Stability, peace and development are badly needed to secure the region's well-being and to serve the interest of the whole world.

Q: Do you think war in Iraq is inevitable?

A: If logic, responsibility and morality take the upper hand, war might be even averted. But if lordliness, jungle principal and brutality prevail, then all is possible - developments that abuse logic and the humane civilization model.

Q: The conflict in the Middle East continues causing a lot of civilian death. In your opinion, how should Palestinians and Israelis solve the conflict?

A: No one can deny that Palestinian people has fallen the victim of the cruelest injustice and oppression. Three out of four Palestinians have been driven away from their homes and many have been slaughtered. The place of local people has been taken by others that have flocked from different parts of the world. The people of Palestine acknowledges the existing reality and the resolutions of the United Nations but Israel does not recognize these resolutions and does not allow the creation of a Palestinian state. The only possible solution of the Palestinian problem is the creation of a democratic state in Palestine, which will be the home Muslims, Christians and Jews to replace a racist state that does not respect the right of life and freedom of others.

Q: Libya plays an active role in the African Union. How can the rest of the world help Africa manage its problems?

A: The role of the Great Jamahiriya and especially the part played by Col. Muammar Qaddafi, the leader of the Great September Revolution, are aimed at the salvation of the continent by means of using its goods and huge material resources in the interest of African people. I think the rich countries, especially those in Europe, have the obligation to cooperate with the Jamahiriya in order to help Africa that has suffered years of neglect and shortages. Europeans and Americans are much to blame for these shortages, for the slavery and the poverty of African people. I think justice will be served if Africans are aided in their development so that they achieve well-being. This will also help all humanity, as its greatest enemies - ignorance, poverty and disease, could be defeated.

Q: How do you describe Bulgaria in three words?

A: Bulgaria is a small, beautiful country inhabited by well-bred and cultivated people with a sense of beauty. I am happy to know Bulgaria and the Bulgarian people among which I have many friends.