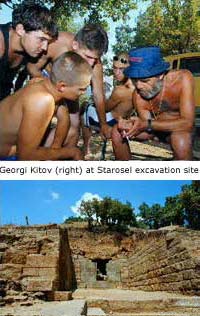 Georgi Kitov is one of the most renowned archeologists in Bulgaria. He is also famous for his zeal in fighting treasure hunters and burocrats who stand in the way of his discoveries. In August 2000, he unearthed the largest yet found Thracian temple near the village of Starosel in central Bulgaria.

Q: Mr. Kitov, you were at an excavation site in central Bulgaria just a few days ago. What are the latest discoveries of your team?

A: In 2002, we have unearthed three Thracian temples. One of them is built in a fashion, which the archeologists are already familiar with. But the other two yield evidence of architecture solutions that have never been seen in a Thracian building before. One of the temples has gallery with fourteen pillars. In Bulgaria, such gallery was found only in the Antique Theatre in Bulgaria's second biggest city - Plovdiv. However, the theater dates back to the Roman age while this Thracian temple was built earlier - in the 6th - 5th century BC. It is also the only Thracian temple with a gallery not only in Bulgaria but on the Balkan Peninsula as well. These sanctuaries were found not far from the village of Starosel where in 2000 we unearthed a huge Thracian temple.

Q: The discovery of the big temple in Starosel in 2000 was hailed as a true sensation. What kind of sanctuary is this?

A: "Unique" is the right word to describe it. This is the largest and the most impressive Thracian temple that has ever been unearthed. Such sophisticated architecture has never been seen by thracologists before. To tell you the truth, if someone has told me before that such architecture solutions could be found in a Thracian building, I would have laughed in his face. In the light of what we knew about Thracian civilization, such sophisticated design seemed impossible. The temple also yields evidence that in the end of the Bronze Age, Thracia and Mycenae were the co-authors of the Mycenaean civilization - one of the most magnificent cultures of its time. The temple in Starosel is surrounded by 241-meter long wall made out of some 5,000 well-tooled but deliberately rough-surface blocks. This wall is now three meters high but we think in ancient times it reached the impressive five meters. The two-chamber temple is approached by stairs and a corridor. Outside, there is an impressive parade staircase. There must have stood two stone lions. Regrettably, treasure hunters had already stolen them when we got to temple. The temple itself was build of a rare easy-to-polish stone brought from distant lands to contrast the rough granite of the wall. The ancient constructors wanted this to symbolize the divine world - beautiful and attractive and the real world - full of hardships. At the entrance, we discovered ornaments that have been previously found only in a mound near Panagyurishte in central Bulgaria. This gives me a reason to oppose the hypothesis that the famous Panagyurishte gold treasure was brought from Persia or Greece. I think it was made in Thracia. I also believe that one of the scenes carved into the gold that shows armed men dancing depicts a religious ceremony at Starosel.

Q: Do you think that this magnificent sanctuary is connected to the Thracian kings?

A: We dated the temple in Starosel back to the end of the 5th century BC. Later on and even in our time, rulers have been buried at sacred places. For example, we know that Bulgarian King Boris III was buried in the Rila Monastery during World War II. The same thing with ancient Thracians whose rulers were buried in important sanctuaries. I think as sophisticated and complex as the temple in Starosel is, it might have been erected only by a very powerful king. In the 5th century BC, such powerful ruler was Sitalces who reigned over the Thracian tribe Odrisi. He was very rich, mighty and compelling. He got killed in a battle with a rival Thracian tribe. We believe his body was taken to the temple in Starosel. Actually, the temple was used for some hundred years and then something happened in Thracian religion or perhaps another dynasty seized the power (we know relatively little about Thracian history). So, the temple in Starosel had to be erased from the face of earth and from the memory of the next generations. It was covered with earth so carefully that when we got to the site, there was not a single drop after all these centuries. In 2002, when we discovered the three temples in the vicinity of Starosel, we found evidence of the same drive for destruction.

Q: Do these latest discoveries shed light on the role of the Starosel temple in ancient Thracia?

A: Six temples have already been discovered in the vicinity of Starosel and what strikes me is that they don't look alike. All six are of different architecture type and of different disposition. That makes me think that this area may be described as the "sacred valley" of Thracians. It is possible that different Thracian tribes built their temples in that area and pilgrims flocked to it. Perhaps, these temples were immune even in wartime. This reminds me of Delphi in ancient Greece where all Greek provinces had their temples and treasuries. I hope that we will be able to prove the same thing about Starosel but for now this is just a hypothesis.

Q: What is the scale of the discovery in Starosel?

A: It could be compared to discoveries such as the tomb of Phillip the Macedonian in Greece. But I would like to say that Greece has been much wiser than Bulgaria in advertising its historical heritage. They have turned this tomb into first-class tourist attraction. Hundreds of people can visit the site every day to enjoy the monument. There, they can have a coffee, a lunch and a rest in a good hotel as well. On the contrary, the access to the temple in Starosel is hampered. The road is very bad and there is just one guide. However, more than 150 people visit the temple daily provided weather is good. Some run the risk of breaking their cars, some come on foot. This happens with zero advertising. This summer, we saw the first wave of organized tourists as a German company sent its buses twice in a month. The tourists obviously left the site very pleased and thrilled. An Italian company also scouted Starosel and said it will dispatch tourists next year.

Q: Let's get back to Thracian civilization. What have archeologists discovered about it?

A: First of all, the Thracians are the earliest known by name population of Bulgaria's land. It has been already proved that they were co-authors of the Mycenaean culture. The Thracians reached the culmination of their civilization in 6th - 3rd century BC. Numerous golden and silver treasures as well as impressive tombs and temples date back to that time. By and large, the culture is of the same significance as the civilization of ancient Greeks. However, ancient Greece is tenderer, more human. It was well explored in the Renaissance and that is why Thracian civilization is more interesting now. It constantly yields new discoveries. But it is true that Thracian civilization is not yet well "outlined." The discoveries are not repeating themselves. When they start to repeat, we will be able to outline the main characteristics of this culture.

Q: What did you mean by saying the Greek culture was tenderer?

The principle of ancient Greek art is "a man good and handsome." The ancient Greeks idealized the human being - they showed only the good traits of the character and the pleasant features of the appearance. In a contrast, Thracian art is a bit naturalistic. In the tombs that we have unearthed, the frescoes do not depict gods or handsome athletes - they show ordinary people. One of my favorite frescoes shows a really fat man, naked, unattractive but as real as he can be. There are also young horsemen that all have individual features - they simply don't have to be good-looking. And there is something else - Thracian goldsmiths and painters made stylized animals while the Greeks depicted the animals as they are. At first sight, those stylized animals are not so appealing. However, in the stylization, the Thracian artists achieved real perfection. With a few hatches, they managed to convey the character of the animal. Thracian artists also had rich fantasy. They created monsters that, for example, had ram heads instead of hoofs. This is completely out of question in the culture of ancient Greece.

Q: Do you expect other grand discoveries in field of thracology? What do you think about the expedition that is searching for the magnificent Dionysus temple visited by Alexander the Great in the Rhodopi Mountain?

A: I don't want to comment... If we were looking for a sensation, we would have said that the Dionysus temple was in Starosel. There are several archeologists who already said that they had found this temple. Perhaps, someone has discovered it but it's impossible all of us to have found it at the same time.