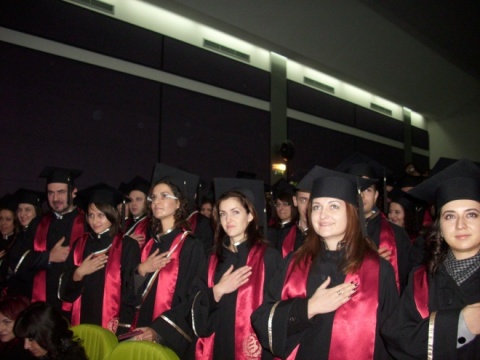 Gloria Petrova speaks proudly of her father, a prominent cardiologist in Bulgaria, who started from humble beginnings, worked hard to become a doctor, and is able to finance her medical education and help kick-start her career.

Petrova is a fifth-year medical student, but even with her father's contacts and helping hand, she is considering heading abroad to finish her studies and start work as a physician.

"I want to leave and set up and develop my life somewhere else because I don't see that many opportunities here," she says. "There are a lot of unfair things here and I don't like it… I want to go to a place where there are rules." Petrova explains that lack of regulation and accountability not only in the medical field but in other aspects of life in Bulgaria is what drives her to think of a career abroad.

Three of her closest friends at university also have considered the possibility of leaving Bulgaria. Ivelina Stoyanova is considering Germany. She is currently studying German and hopes to follow her boyfriend who intends to travel soon.

"What can you do here with 300 leva [0] salary [per month]? You can't create a family. Your parents have to support you, your husband and your child," she says, referring to the amount most young doctors receive in Bulgaria during the four years of specialisation after the initial medical degree.

Some doctors get state-sponsored positions where the salary is double, but only a lucky few receive such jobs.

Stoyanova has gone to medical career fairs where firms hired by hospitals in Germany advertise positions. She heard that young doctors who are studying to be specialists in Germany receive 2,500 euros (,400) to 3,000 euros (,100) per month after taxes.

The other two women studying medicine - Martina Vulcheva and Ivelina Dimitrova - are also considering options abroad. Vulcheva has looked into a medical career in France and Dimitrova has explored options in the United States and the United Kingdom.

Every year Bulgaria loses between 500 and 600 doctors to emigration, according to Dr Tsvetan Raychinov, head of the Bulgarian Doctors Union. The graduating class of medical students for the whole country is about 600 people annually.

One anaesthesiologist who requested anonymity because she was not authorised to speak to the media,  says since Bulgaria joined the EU in 2007, four of her colleagues in one of the biggest state hospitals in Sofia left for France and one emigrated to Germany.

She says the number of anaesthesiologists has fallen by half in the last five years, and the hospital at which she works has not been able to fill vacancies for specialists in her field.

Although monetary considerations are part of the motivation for young doctors to leave, Petrova and her colleagues also tell stories of corruption, nepotism, dysfunction and poor facilities. One major reason discouraging young doctors from pursuing their careers in Bulgaria is the difficulties they face trying to specialise.

Although the country is experiencing a shortage of specialists in many medical fields and almost 70 percent of the doctors currently working are above age 46, medical graduates find it difficult to receive adequate qualifications with older physicians standing in their way, fearing competition, those interviewed told Al Jazeera.

"One can observe a total monopolisation on the part of medical professors and academics, who are hanging on to their field and have the tendency not to let young doctors acquire qualifications to a [higher] level because they would 'steal' their patients," explains Dimitrova.

"I don't understand this [monopolisation]. We [have to] teach [the young doctors] because they will be the ones treating us. The population is getting older, there's more people falling sick, so there's enough work for everyone. To hide your 'trade' from others is not good," says Dr Georgi Nikolov, a doctor at a state hospital in the city of Pleven.

With low salaries and few opportunities for professional development, hospitals outside the major cities suffer even more from physician deficit. Raychinov says this has forced smaller state hospitals to close down.

Between 2009 and 2013 at least nine hospitals  closed across Bulgaria, mostly in smaller towns. Rural residents now have to travel sometimes for hours to the nearest big city for medical help.

"We might reach the point where there won't be anyone left to treat us, my generation," the doctor who requested anonymity warns.

Unlike Western Europe, poorer countries such as Bulgaria, which is suffering from a deepening demographic crisis, do not have an influx of foreign doctors to fill in the gaps. At the same time, every year Bulgaria accepts thousands of foreign students who choose the country for the affordable medical education it offers.

Indian doctors Shreya Ohri, Shefali Rathee and Shamsher Singh Mann graduated together in 2010 from the medical faculty in Pleven. They decided to stay in Bulgaria for their specialisations as well. However, none of them is considering staying and working there.

Rathee and Mann say other than a better salary, Indian doctors also receive many benefits such as bill rebates, subsidised housing and family insurance. For foreigners to stay and practice in Bulgaria, there has to be jobs offering higher compensation and bigger facilities, they say.

Nikolov - who in 2013 was commended by the Bulgarian Doctors Union for his "merit in raising the prestige of the doctor's profession" - says foreign doctors are not the solution to the crisis in Bulgaria. In his opinion, there are enough Bulgarian medical graduates who can stay and fill the gaps in the healthcare system.

"The minimum a young doctor should receive is 2,000 leva [USD 1200]… This remuneration would give the young doctor a chance to develop," Nikolov says.

He insists there has been an improvement in the medical field since he started his specialisation in 1997, when Bulgaria suffered a serious economic crisis with uncontrollable inflation. Nikolov's starting salary that year was the equivalent of a month.

Comprehensive change can be achieved if there is a healthcare strategy that does not change with different governments, and focuses on prevention, he says.

"Discussions [with the health ministry] are conducted all the time, but it is my conviction that in most cases they are fruitless, regardless of what government is in power," says Raychinov, explaining there is a lack of political will to change the status quo.

Addressing the issue of retaining young doctors, the Bulgarian Doctors Union has suggested regulation changes to facilitate specialisations and to implement adequate salaries for recent graduates. The union also set up a team of experts to revamp the model of the healthcare system, but for political reasons, there has been no application of their suggestions, says Raychinov.

As politicians continue to dodge political responsibility for Bulgaria's much-needed healthcare reform, the crisis in the medical field is deepening, as more and more young doctors give up on the country.

Just a day after this year's graduation ceremony at Sofia Medical Faculty, six graduates applied for certificates from the Bulgarian Doctors Union to practice abroad. In total, 23 have applied since the beginning of 2014.

The choice to leave is not an easy one and neither Petrova nor her friends want to make it. But the future of their professional development in Bulgaria at this stage is bleak.
"It's not fair that to work or to study people have to leave their families," Petrova says with tears in her eyes.

Views on BG » Be a reporter: Write and send your article
Tags: Bulgaria, doctors
Advertisement
Advertisement
Expats.bg All Are Welcome! Join Now!
Related Articles:
More from Views on BG