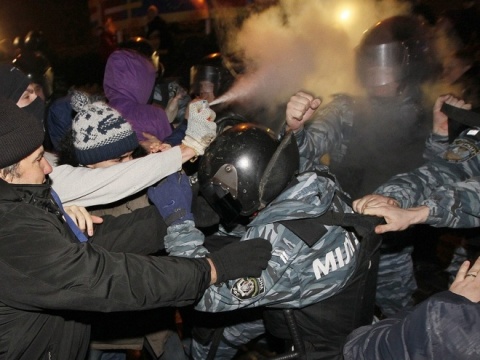 Pro-EU and antigovernment protest rallies remain powerful across Ukraine with one of the buildings of the Justice Ministry in the capital Kiev becoming their stronghold overnight.

Participants in Kiev's riot have seized without resistance the buildings of the Ministry to keep warm and spend the night there, Russia's ITAR-TASS reported, citing a press release of the Ministry of the Interior of the country.

116 protesters have been arrested by riot police Berkut prior to that.

Ukraine's Justice Minister, Olena Lukash, cited by The BBC, has warned antigovernment protesters occupying her ministry that she will call on the National Security and Defense Council to declare a state of emergency if they do not leave and on the President to halt any negotiations with protesters.

Protesters are quoted in saying that the seizure of the Ministry is a symbolic act and they were not going to do any hooliganism or hurt anyone.

Unrest is spreading across Ukraine, with activists taking over municipal buildings in up to 10 cities such as Sumy, Zaporizhzhya, Cherkassy, Chernihiv, Dnipropetrovsk, Odessa and Kharkov.

The BBC reports that buildings have come under attack even in eastern areas which have traditionally had closer ties with Russia and where President Viktor Yanukovych has enjoyed strong support.

18 riot police officers have been injured in Dnipropetrovsk; 2 of them have sustained knife wounds. 40 demonstrators have been arrested in the same city, according to local press.

The crisis was sparked by Yanukovych's decision not to sign an EU association agreement, and has escalated with the deaths of several activists in recent days.

The protesters were further angered by the introduction of new anti-protest laws.

The opposition is demanding that the EU deal be signed, political prisoners be freed - including former Prime Minister Yulia Tymoshenko - and the repeal of the new laws.

The fresh unrest comes after opposition leader Arseniy Yatsenyuk, who is close to Tymoshenko and leads her party, rejected Yanukovych's offer to appoint him prime minister, saying the key demands must be met.