Some 80,000 Bulgarian Students Taken Up Summer Jobs in US 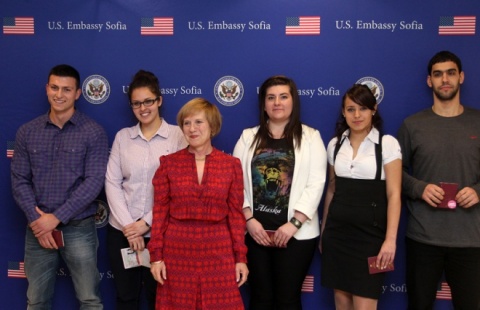 US Ambassador RIes handed out the first five visas to Bulgarian students at the ceremony in Sofia, Bulgaria. Photo by BGNES.

US Ambassador to Bulgaria Marcie B. Ries handed out the first five visas to students who will visit the US as part of the Work and Travel program in 2014.

"The Work and Travel (WAT) program has been working in Bulgaria since 2000 and more than 80,000 people have already found summer jobs in the US through it," Ries said at the ceremony in the US Embassy in Bulgaria's capital city Sofia, Friday.

"The WAT program is an inspiration for young people. They are given the opportunity to work and to support their studies, to gain new experience in foreign countries and cultures," US Ambassador to Bulgaria noted.

US Consul General to Bulgaria Deborah Campbell has disproved last year's rumors of US intentions to terminate the WAT program.

"The Work and Travel program is of great importance to the United States and we would like to expand it so that more students would take part in it," Campbell announced.