Klitschko to Meet with Ukraine's Yanukovich in Clashes Aftermath 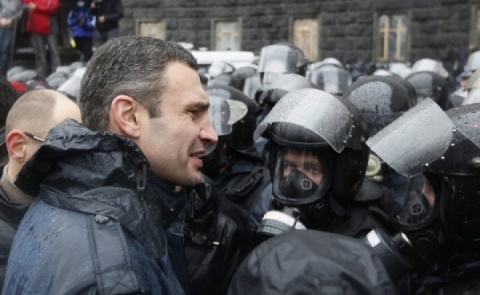 Ukraine's opposition leader Vitali Klitschko is going to meet Tuesday with President Viktor Yanukovych to discuss violent clashes in the capital Kiev and across the country.

"Yanukovich promised me control on the situation in the country, but failed to fulfil it. I will meet with him to seek answers, including on the five demands of the opposition," said he, cited by the Russian RIA-Novosti.

The former world boxing champion and leader of the opposition party UDAR (Punch) has been a prominent figure in the anti-government protests, which began in November, after Ukraine's President Viktor Yanukovych backed out of an Association Agreement with the EU.

The BBC reports that Yanukovych warned that the country's stability is threatened by continuing clashes between police and anti-government protesters in Kiev.

"Now, when peaceful actions are turning into mass unrest, accompanied by riots and arson attacks, the use of violence, I am convinced that such phenomena are a threat not only to Kiev but to the whole of Ukraine," he has said in a statement on Monday evening.

A burnt-out line of buses and trucks in central Kiev marks the boundary between protesters and police. Clashes erupted on Sunday, after long-lasting peaceful pro-EU rallies. At least 30 people have been arrested in the clashes, and about 100 injured, including journalists and dozens of police officers.

Both the government and opposition leaders have blamed a small group of protesters for provoking the violence. They are believed to belong to a little known nationalist organization Right Sector, local media reports.

According to The BBC, dozens of protesters had camped out overnight despite temperatures dropping well below freezing and the huge riot police presence.

Some hurled cobblestones and petrol bombs at police, and banged on lamp posts and oil drums.

The police responded by firing plastic bullets, tear gas canisters and stun grenades, and even throwing back the cobblestones, the BBC correspondent reports.

On Monday, EU foreign ministers released a statement expressing "deep concern" about new legislation, which they said was passed under "doubtful procedural circumstances."

The authorities say police have the right to use firearms in self-defense.

The measures, which were hastily voted last Thursday, include ban on the unauthorized installation of tents, stages or amplifiers in public places; provision to arrest protesters wearing masks or helmets; ban on protests involving more than five vehicles in convoy; hefty fines or jail for breaches of law

The governing party of President Yanukovych says the legislation is in line with European standards.