Bulgarian Tobacco Growers Are Setting Their Crops on Fire 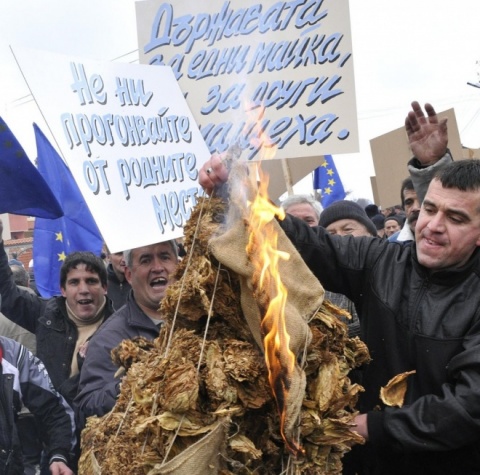 Bulgarian tobacco growers are setting their crops on fire in protest against low purchase prices. Photo by BGNES.

More than a thousand Bulgarian tobacco growers have blocked the road in Garmen municipality protesting against the low tobacco prices.

„In protest, local people are setting tobacco bales on fire. We have prepared banners with our demands written on them," the Mayor of the local municipality of Satovcha, Arben Mimenov told Bulgarian Darik news agency.

A tailback longer than one kilometer has been formed in the area.

Disgruntled tobacco growers have been staging protest rallies blocking the road to Gotse Delchev and Drama (Greece). Some have even stopped their children from attending school in sign of protest.

They insist on prices of no less than BGN 6.50 per kilogram. Tensions among them escalated after the first days of the new year, when the belated purchase campaign finally began, but at a much lower price than expected - about BGN 5 per kilogram.