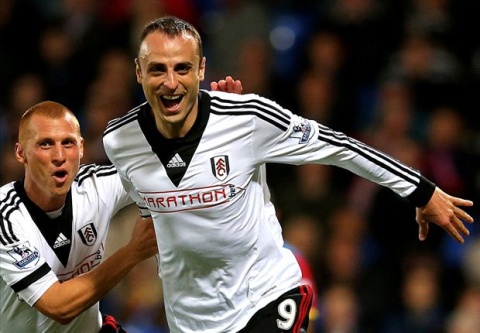 Tottenham are eyeing up this month a move for Dimitar Berbatov, who is happy at Craven Cottage but is open to the possibility of a return to the club, according to media reports.

Spurs are in the market for a new striker and have targeted the former White Hart Lane favourite as one of a number of short-term options.

Goal understands that GBP 1.5 M-rated Berbatov, whose Fulham contract expires in the summer, is happy at Craven Cottage but is open to the possibility of a return to the club where he played some of the best football of his career.

Berbatov is settled in London and has privately ruled out a switch to anywhere outside of the capital.

It is believed that neither Arsenal manager Arsene Wenger or Chelsea boss Jose Mourinho are interested in the Bulgarian despite their stated need for fresh striker talent.

However, Spurs have now registered their interest in Berbatov, who turns 33 the day before the January window closes.

The north Londoners are looking for a replacement for Toronto-bound Jermain Defoe, who will make his White Hart Lane exit on February 28, leaving manager Tim Sherwood with just two senior strikers in Emmanuel Adebayor and Roberto Soldado.

Relations between Tottenham and Fulham are understood to be frosty but that would not put off Spurs chairman Daniel Levy from attempting to strike a deal.

Levy was angered at the manner in which Berbatov engineered his GBP 30.75 M exit to Manchester United in 2008 but tried to re-sign the striker on deadline day in August 2012 before he committed to Fulham.

Berbatov has not been quite as effective in his second season at Fulham as he was following his arrival from Manchester United, but has weighed in with three goals in his last four games and is still considered the team’s principal matchwinner.