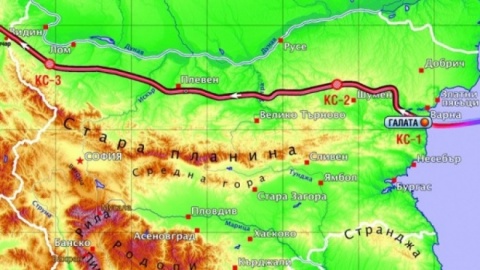 In March, the Russian gas pipeline project "South Stream" will receive a building permit by the Bulgarian authorities.

In the same month, it will become clear who will be the contractor for the Bulgarian section. It is expected that actual construction on the pipeline will begin in June, investor.bg reported.

The comments were made Thursday by the CEO of South Stream Transport Oleg Aksyutin, who is in the Bulgarian Black Sea city of Varna in connection with the opening of an information center for "South Stream".

In early December, the European Commission cautioned that the bilateral intergovernmental agreements on the South Stream gas pipeline project between Russia, Bulgaria, Serbia, Hungary, Greece, Slovenia, Austria and Croatia had to be renegotiated in order to comply with EU law.

On Tuesday, Russia informed it was not willing to annul the agreements it has signed with six EU countries, including Bulgaria.

Instead, Russia expects the European Commission to put forth proposals on the adaption of the inter-governmental agreements to the Third Energy Package, Russian Permanent Representative to the European Union Vladimir Chizhov has said.

Chizhov reminded that the six EU countries had earlier authorized the European Commission to conduct negotiations with Russia on South Stream on their behalf.

A groundbreaking ceremony for the gas pipeline was held on October 31, 2013, at site of the Bulgarian compressor station "Rasovo."

The village of Rasovo is in northwestern Bulgaria in the minciplaity of Medkovets, Montana region. The ceremony was attended via video link from the building of the Council of Ministers in the capital Sofia by the CEO of Russian energy giant Gazprom, Alexei Miller, the Prime Minister of the Republic of Bulgaria Plamen Oresharski, the Minister of Economy and Energy of Bulgaria, Dragomir Stoynev, and the Energy Minister of the Russian Federation, Alexander Novak.

The construction of the Bulgarian section South Stream gas pipeline was officially launched after a meeting of over four hours between Miller and Oresharski.

A year earlier, the previous center-right government of Boyko Borisov signed with Russian state-owned energy giant Gazprom the final investment decision for the construction of the South Stream gas transit pipeline. The South Stream agreement was signed in the Bulgarian capital Sofia on November 15, 2012 by former Bulgarian Prime Minister Boyko Borisov and Miller, in addition to another agreement for the Russian natural gas supplies for Bulgaria, which stipulates a 20% discount as of January 1, 2013.

The pipes will go from Russia to Bulgaria via the Black Sea; in Bulgaria it will split in two – with the northern leg going through Serbia, Croatia, Hungary, and Slovenia to Austria and Northern Italy, and the southern leg going through Greece to Southern Italy. The Black Sea underwater section of South Stream between Russia and Bulgaria will be 900 km long, and will be constructed at a maximum depth of 2 km.

In order to service the supplies for South Stream, Russia will expand its own gas transit network by building additional 2 446 km of pipelines with 10 compressor stations with a total capacity of 1473 MW, a project to be called "South Corridor" and to be completed in two stages by 2019. The pipeline's core shareholders include Gazprom with 50%, Italy's Eni with 20% and Germany's Wintershall Holding and France's EDF with 15% each. Gazprom has already established national joint ventures with companies from Austria, Bulgaria, Croatia, Slovenia, Greece, Hungary and Serbia to manage the onshore section of the South Stream pipeline.

The opposition right-wing Democrats for Strong Bulgaria (DSB) party recently slammed the South Stream gas pipeline project as the "second huge corruption-ridden project of the Bulgarian Socialist Party (BSP), the Kremlin and the energy mafia." To illustrate their point, DSB members pointed out that Bulgaria was not going to receive any money at all for 15 years in a row and all revenues generated by the gas pipeline during the period would go to Russian energy giant Gazprom.