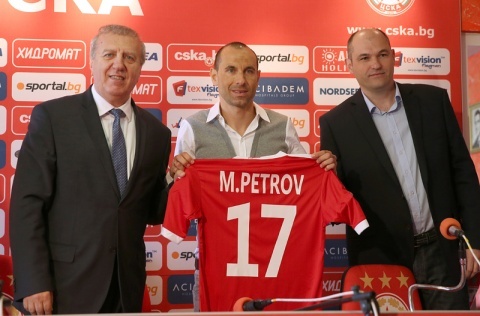 Martin Petrov signed for CSKA in October. Photo by BGNES

The former Bulgarian national team winger Martin Petrov does not rule out the possibility of returning to play in English club football, however denied having received any offers.

In recent days, English media linked Petrov with a transfer to Premier League side Stoke City.

"I only read about this last night. Nobody has contacted me from Stoke. Thus I cannot say yes or no. I keep my doors open, as you know how dynamic things are in football, especially during the transfer windows", stated Petrov, a day after his 35th birthday, cited by Sportal.bg.

The Bulgarian left his mark in European football, when he played for Atletico Madrid, Wolfsburg, Manchester City, Bolton, and Espanyol. In October, the speedy winger returned to Bulgaria to reunite with his former team CSKA Sofia.

Petrov added that his current focus is on CSKA and helping the team recover from the difficult position it is in.