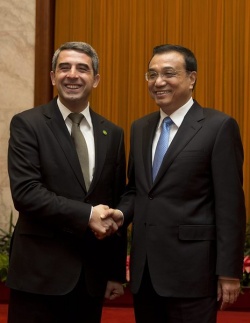 Bulgaria and China have reached agreements to further intensify bilateral cooperation and trade in the field of agriculture, revealed Bulgarian President Rosen Plevneliev.

Tuesday is the third day of the Bulgarian President's official visit to China, which also includes a business delegation.

He further revealed that agreement has been reached on a number of specific documents to be signed imminently, including ones determining standards for the exportation of Bulgarian meat, dairy and agricultural produce.

Bulgarian President Plevneliev has announced that he views the visit to China - his first abroad in 2014 - as pivotal in bilateral relations.

He has consistently phrased an ambition to convince Chinese partners to view Bulgaria as a door to the wider EU market.

Tuesday Plevneliev also revealed that the two countries have reached concrete agreements regarding infrastructure projects to be built in Bulgaria.