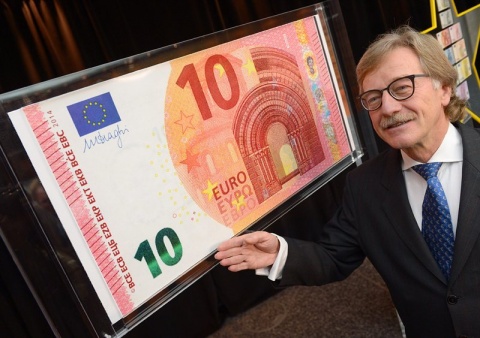 Yves Mersch, member of the Executive Board of the European Central Bank (ECB), presents the new 10 euro banknote in the ECB headquarters in Frankfurt Main, Germany, 13 January 2014. Photo by EPA/BGNES

The European Central Bank revealed on Monday the new 10-euro banknotes including a portrait of the Greek mythological figure of Europa that will come into circulation from late September.

"The new 10-euro banknote of the Europa series will start circulating on September 23," the ECB said in a statement.

The banknotes of the Europa series are being introduced gradually over several years.

“12 years after the euro banknotes and coins were introduced, it’s easy for us to take them for granted and to forget what an ambitious, even bold, project it was to introduce the euro,“ ECB’s Executive Board member Yves Mersch said as he unveiled the new banknote

“The single currency has helped to bring millions of Europeans together, in all our diversity, and the banknotes and coins are a tangible symbol of our determination to support the European Union. When we say, “The Euro. Our Money”, we really mean it!”.

While the new EUR 10 resembles the one first issued in 2002, it has been given a fresh look and has several new and enhanced security features.

For example, like the new EUR 5, it includes a portrait of Europa – a figure from Greek mythology and the origin of our continent’s name – in the hologram and the watermark.

Like the first series of euro banknotes, the new EUR 10 banknote will be very easy to check manually and visually, using the “feel, look and tilt” method.