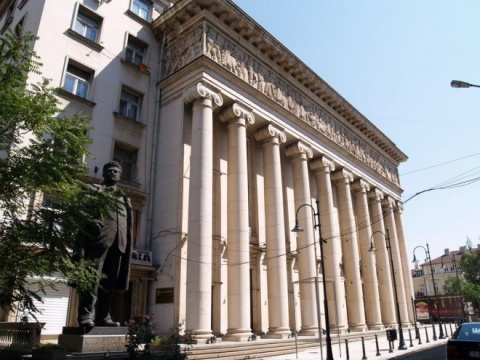 The building of the National Opera in Sofia also houses the headquarters of Bulgaria's extreme-right nationalist Ataka party and the office is State property, file photo

The Bulgarian Associations "Mothers against Violence" is asking Culture Minister, Petar Stoyanovich, to immediately "throw out the headquarters of the ultranationalist Ataka party" from the building of the National Opera in Sofia.

They say that an office of a xenophobic party, whose leader is a nationalist with fascist tantrums, who is bold enough to harass foreign diplomats and attack police officers, cannot be housed under the same roof with the National Opera.

According to representatives of the Association, Ataka must vacate the premises within 72 hours and the State has to give its property - the office on 1 "Vrabcha" street in downtown Sofia to the troupe of the Opera.

They expect Stoyanovich to act swiftly on the issue.

Late on Monday, Ataka leader Volen Siderov verbally assaulted a French cultural attach? during a Sofia-Varna flight and later attacked a passenger and a police officer in a Varna airport shuttle bus. This prompted outrage among majority of Bulgarians and among French diplomats.

As result, Chief Prosecutor Sotir Tsatsarov asked that ultranationalist be stripped of his MP immunity. It will, however, depend on the Parliament to vote for it.